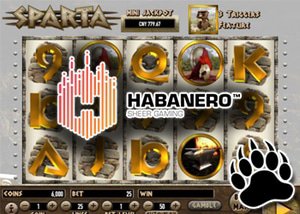 Habanero a casino games software developer has just released a brand new slots games called Sparta which is causing quite a stir.

The new Sparta slots game from Habanero is themed around the ancient Greek city of Sparta and features fearsome warriors, ancient warships, military machinery, and so much more. It is a five reel, 25 pay lines video slot that we are sure players are going to really enjoy especially if they enjoy a trip back in time to ancient Greece. Think gladiators and battles and you get the idea of this new slots game.

This video slot title has been built in HTML5 making it compatible with all operating systems and devices. This game can be enjoyed on Mac, PC, mobile and smarphone including iPhone and iPad. It is fully responsive and will automatically adjust to the size of your screen. It also includes swipe and touch capabilities making mobile gaming even easier. The Sparta slot includes a number of free games during which the highly anticipated Zeus symbols pays a massive multiplier of 1,800 times your total spin wager.

Habanero CEO Nic Ioannoy, said, "We think Sparta will be really popular across a wide range of territories as it is a perfect combination of the old and the new. The Roman Empire game that we released earlier this year has been very well received and we have high hopes for Sparta too." He also went on to state that this new slots game has engaging game play and low volatility and will be really popular with modern players.

The Sparta slot follows on from the release of 12 Zodiacs, Roman Empire, Bombs Away, Gold Rush and Fa Cai Shen, bringing the Habanero casino game portfolio to over 60 slots titles. All of these titles are available at Club Gold Casino.

Habanero is a casino games software provider that has been in operation since 2012. They have over 40 years of experience with offices in Johannesburg, Manila, Sofia, and Kiev. With the launch of Sparta they now have over 60 slots titles, six table games, and 10 video poker titles. They supply their games to online and land based casinos and all the games are hosted on their own platform. Their games are tailored to a wide variety of devices and all can be played on mobile devices including iPhone and iPad. Habanero games can be found in over 25 online casino and they are available in 15 languages, including eight European and six Asian ones.