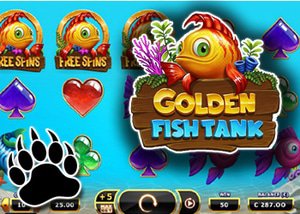 When it comes to looking towards new gaming software developers, one that has made a good impression is the fairly new Yggdrasil Gaming.

It's not so much about the number of games that they have launched but more the quality. So it is with their latest new free slots game called Golden Fish Tank, and once again they've come up with one destined to make a splash, in more ways than one!

Fishing For Wins And A Top Payout

This latest Yggdrasil Gaming creation is a 20 payline 5 reel slot game with all the action taking place in a fish tank, where the Gold Fish is hailed as king amidst the other species, that are also on display.

As well as vegetation, there are other realistic elements one might expect to find such as sunken ships, rocks and sand, creating a realistic environment that fish regularly encounter. There is also the four playing card suits intermingled amidst some of the colorful creatures, creating an ideal atmosphere for such a relaxing setting.

Although the theme may not seem all that original, the features of the Golden Fish Tank free slot game offers lots of fun, and with many of the symbols used for this game coming in the form of cute fish from various breeds, it's just like something you'd expect to find in a fish tank at home, just without some of the prizes that are attainable in the game.

The game has a Wild Logo for its Wild and takes its place to form part of a collective winning combination when called upon. The Gold Fish is the hero of the game and proudly displays the Free Spins symbol, whilst also playing the part of the Scatter.

Without doubt with a top payout of CAD $5,000, Yggdrasil Gaming have created a game that looks truly impressive. For players that lend their hand to such aquatic delights, they are sure to be smitten with the gameplay and various prizes that can be racked up, by spinning one of the many winning combinations that are readily available. Time to take a dip in the water to see if you can become one of its newly elected winners? Why not give it a try and see!