Habanero Ring In The Year Of The Monkey With Fa Cai Shen Free Slots! 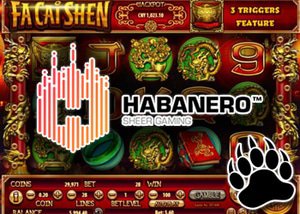 It has just been announced that the quality table and slots game provider Habanero are ringing in the Chinese New Year with the launch of their latest title called Fa Cai Shen.

Fourth New Video Game Since The Start Of 2016

Having been built in HTML5, the Fa Cai Shen free video slots game can be played on home PC's as well as smartphones and iPads, and this new multi-platform game now becomes Habenero's fourth game since the start of 2016, following on from the well-received Bombs Away, Dragon's Throne and Ruffled Up.

The new 28 payline, 5 x 3 reel slots game, has been named after the Chinese God of Fortune, and players get to feel the positive vibes when He makes his entrance under the guise of two guaranteed expanded appearances, acting as a profitable Wild during each of the special bonus spins.

The game also offers players a potential lucrative opportunity to double their winnings by participating in the "Beat The Dealer" side game, and those who wish to gain a sneak preview of the game can do so by checking it out on YouTube.

The game developers now offer their operators a portfolio of almost 70 video slots, 10 video Poker games, as well as 7 table games, to their growing client base. Their games are currently live with over 20 different clients across 14 multiple languages as well as English, and include six Asian and eight different European languages.

This, in no short measure has been aided by recently inked distribution deals with platform providers Mediatech and EveryMatrix, to assist them in their ongoing expansion.

Habanero recently demonstrated and displayed their full suite of games at ICE, running their content simultaneously across desktops, mobile devices as well as a big screen.

Chief Executive of Habanero Nic Loannoy said that the design and graphics of their new Fa Cai Shen slots is certain to appeal to any player who is looking to carry a little bit of festive fortune onwards into the New Year, and the free slot was sure to bring plenty of luck with it as the Year of the Monkey gets well and truly underway.

In conclusion he further added that combining medium volatility with what is a current popular theme, is bound to make this HTML5 free slot game an attractive and engaging proposition, "particularly among the host of major operators who have been expanding their Asia-themed content". They have certainly got off to a smart New Year start, whatever way one looks at it.