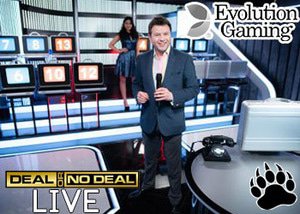 Evolution Gaming is one company that certainly lives up to its name. The legendary live casino software provider has recently revealed a bold new step within the online gaming industry with 10 new live dealer titles that will surely grab the attention of online casino enthusiasts around the world. One of the live dealer titles is called Deal or No Deal which is based on the extremely popular television game show that took the world by storm.

The new Deal or No Deal live game from Evolution Gaming casino software will offer players the opportunity to stress about selecting the correct briefcase and playing through each of the challenges while silently praying that they made the right choice. This phenomenal live dealer title will be available to players 24 hours a day and 7 days a week through desktop, mobile, and even tablet devices.

Deal or No Deal Live Game

According to Todd Haushalter, the Chief Product Officer at Evolution Gaming, the primary goal is to remain completely true to the television game show, that most people instantly fell in love with, while keeping the game optimized for online play and making it functional as a live dealer game. The new Deal or No Deal live game will have a decent mixture of RNG elements which will allow players the opportunity to win big prizes, as well as enjoy rich sound effects and a universally recognizable studio design which will recreate the amazing atmosphere of the hit television show and bring that into an online environment.

The new Deal or No Deal live game from Evolution Gaming will be based on the well-known Endemol Shine television format of the popular game show. This means players will need to make a choice between taking a deal or settling for a cash amount. Alternatively, players can also take a risk and compete for a higher prize.

There's no reliable strategy that will assist a player to receive a higher prize and that is exactly why the game is so immensely thrilling to play or even watch. The decision process to make a deal or to sell the original box accompanied with a mystery amount or to decline the Banker's offer will be entirely up to the player and their willingness to take a risk. The potential prizes can range from a penny up to a life-changing amount and it's the objective of the Banker to buy a player's box for a lower price than what the box is actually worth.

Other Evolution Gaming Titles To Look Forward To

Apart from Deal or No Deal, players can also look forward to 9 other live dealer titles that were recently announced by Evolution Gaming. This includes Lightning Dice with multipliers up to 1,000 times, Super Sic Bo with random multipliers up to 1,000 times, Free Bet Blackjack, and Side Bet City which is an 80's themed poker game with enormous payouts.

Players will also be able to indulge in two new RNG games that will be available in the First Person Gaming section, Two Hand Casino Hold'em, offering two hands for every round, Infinite Blackjack which allows for an unlimited number of players simultaneously, and one secret game that will only be revealed at a later stage.

Where to Play the new Deal or No Deal Live Game

Evolution Gaming is starting a new era of live gaming, approach fresh and unexplored markets with the new Deal or No Deal live game. Players will be able to test their luck on the new live game at a wide range of Evolution Gaming sites, including Casumo Casino where you'll be greeted with a 200% match up to $500 along with 20 sensational free spins on Starburst.