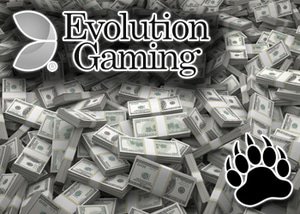 With the current demand for live dealer casinos on the increase, Evolution Gaming doubled their profits with the fourth quarter of the 2015 gaming year.

Releasing their final results this week, the live dealer casino provider showed that in just the fourth quarter alone, they had an increase of 62% in online gambling revenues to CAD $33.86 million.

Evolution Gaming reportedly said that most of their gains have come from building and developing new relationships and expanding personal relationships with their existing client base. Last year the company earned CAD $145.72 million which is a 55% increase in revenues, whilst operating profits also earned a healthy percentage increase of 82%.

It would appear the ever increasing online gambling mobile market has played a large hand in the growth of Evolution Gaming. Mobile revenues increased in Q4 over Q3, which was a key driving force for about a third of operators live dealer earnings revenue. Other contributing key factors making for the successful year, included their launch of Baccarat Squeeze, Caribbean Stud Poker, and their Dual Play Roulette.

As expected the company's operating expenses rose sharply as their payroll rose dramatically. At the end of 2014 they had 1,278 employees, however to factor in all their recent progressive developments, as of December 2015 this figure had risen to 1922 employees.

Just this month alone they completed the acquisition of the premises that houses their Riga Live Dealer studios, a deal that they felt necessary to accommodate the inevitable further expansion that is waiting in the wings.

Evolution say that they expect great things in the future from their deals with land based casinos who are presently looking to develop new income streams. Building on the successes they have had with customers such as the Casino Campione, Genting and the Dragonara casino in Malta, they also recently launched their Live Roulette product for the Casino Barcelona.

Already this year they have signed new agreements with Scientific Games for a year on year deal for their Texas Hold'em, and they have also signed strategic agreements with SBTech, Casumo and Gamesys, another indicator of further advances as 2016 progresses.

Evolution Gaming recently announced the hire of a couple of senior execs including former NetEnt HR director Maria Furenmo as their Chief People Officer, and the former Gavagai CEO David Craelius, who will now fill the role of their Chief Technology Officer. They expect to create even more new relationships as they navigate their way through the new year with more and more land-based casinos expanding their presence online.