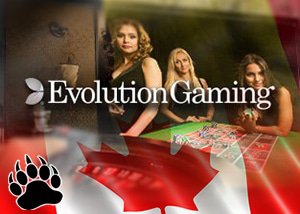 Gaming in Canada, and more specifically Ontario, has always been complicated. The laws surrounding online gaming make it difficult for people in certain regions to play online, but that looks to be changing. Recently the Evolution Gaming Group AB announced that online casino players in Ontario will be able to enjoy live dealer games. To put it simply, Evolution Gaming has brought live dealer games to Ontario. This is a momentous occasion for the province and the entire country of Canada, and it will surely help with the growth of online gaming in the region.

In October of 2021, there was a press release from a Swedish firm which announced the launch of real time games such as baccarat, blackjack, and roulette coming to Ontario as a result of a refreshed partnership with the Ontario Lottery and Gaming Corporation. These titles will be available to users via the OLG.com domain. This announcement means that games of this nature are now available in four Canadian provinces: British Columbia, Quebec, Alberta, and Ontario.

Part of the reason that Evolution Gaming could bring live dealer games to Ontario was that they entered the newly regulated iGaming Market of Netherlands earlier in October 2021. They also announced that all of the titles that are going to be made available to Canadians will be produced from Bespoke Studio in Vancouver, British Columbia. This allowed the company to add these popular titles to their already popular collection of lottery, video slot, and scratch card games.

Jeff Millar is the spokesperson and director for the company in North America. He announced that the new relationship with the Ontario government strengthen the company's position in the country of Canada. Now that they are able to operate without difficulty in the province, they are dedicated bringing enhanced gaming experiences to people across Ontario and Canada.

Players Will Be Able to Claim New Bonuses

Online gaming is not new to Canada or Ontario, but live dealer games are. As a result, users will be able to claim new bonuses that were not previously available to them. Fortunately, the bonus claiming process will not be any different from what it was before. There are just more bonuses to claim than there were before. As a result, before a player arrives on the OLG website and casino, we encourage them to keep an eye out for other no deposit and match deposit bonuses in the same way you would on sites like CasiGo Casino, Slots Million Casino, and Gaming Club Casino. We will do our best to keep you up do date with an updated list of no deposit bonuses on various online gaming sites.

Take Advantage of All the Best Software

With Evolution Gaming bringing live dealer games to Ontario, residents of the province will be able to take advantage of all the games from the best software providers in the industry. Instead of only getting access to a handful of games and features that these providers have to offer, they will get access to everything that they provide to users in other countries. For example, popular software providers like NetEnt and Microgaming have a history of providing excellent live dealer titles to players on various sites. Now players will be able to enjoy these titles.

While people in Ontario have been able to enjoy online gaming in the past, they have not had the opportunity to enjoy the full scope of it. That began to change as 2021 came to an end and we set our sights on the future in 2022. Players will have access to live dealer games that were not present before, and as a result, they will be able to win more money than they were able to in the past.