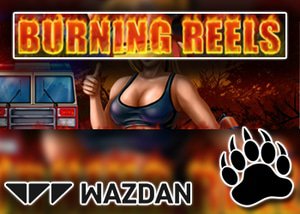 Renowned software producer, Wazdan, known for their innovative slots has just announced the unveiling of its latest online slot titled Burning Reels. Take part in a dangerous heated mission in this firefighting slot and obtain some blazing wins when spinning the reels. New Burning Reels slot slot will make its debut at all Wazdan Casino's on mobile and web browser devices. So don't miss out on the lavish opportunities this new hot slot has to offer.

All about new Burning Reels Slot

Featuring with 5 reels and 20 paylines this hot new slot from Wazdan is packed to the rafters with some sizzling extra features that will heighten your gaming experience. Enthused on the hazardous work in the fire department, new Burning Reels slot transports you to a blazing forest. It is up to you to extinguish the raging fire with the aid of several symbols that is revealed on the reels. The design of graphics and animation are first-rate, and the game can be enjoyed effortlessly on all devices, including mobiles like tablets and smartphones. Another big advantage of this game is the soundtrack, which builds a proper tension and gives a sense of action.

All the symbols characterized in new Burning Reels slot are directly related to the games theme and makes the game play even more appealing. Discern symbols resembling a helmet, fire truck, fire hydrant, fire hose, an ax and even a helicopter. The wild symbol is portrayed by the fireman holding an ax. The symbol can substitute all other symbols emerging in the game except for Scatter. Thanks to its special role it is easier to complete a winning combo, which has a direct influence on the amount of cash one can obtain.

The Scatter symbol is responsible for unlocking the Free Spins feature and to do this player has to obtain at least 3 symbols displaying an striking red-haired woman wearing black helmet. Furthermore, during the Free Spins attribute each win can be multiplied, all you need to do is to obtain the red bell symbol on the middle reel. While playing Burning Reels players can multiply every prize by initiating the Gamble Feature, during which punters has to extinguish one of two burning bushes.

As a recommended online betting review site we encourage you to check out the New Buring Reels Slot at LVBet Casino the number one choice for real money Canadian punters. After downloading the software, all new players qualify for a large welcome package worth £1,000 in bonus funds plus 1,000 free spins. The package contains four deposit bonus unlocked by new members first four deposits. Be sure to keep an eye on the promotions page of the website so you don't miss out.

If you want to play the new Buring Reels slot from Wazdan why not visit LVBet Casino today.