Play the new Relic Seekers Slot at all Microgaming Casinos 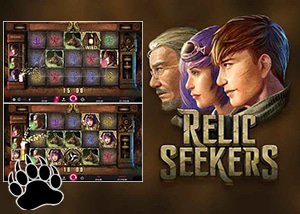 Free Man, Nora, and Professor Morgan are all part of a secret and prestigious organization known as the Relic Seekers. The main reason for this organization is to hunt down the most priceless relics and artifacts that are scattered across the globe. You have been chosen to join the Relic Seekers in their latest mission where they will unearth precious relics in an ancient tomb. Many believe that the tomb is filled with precious gemstones, gold coins, incredible relics, and phenomenal rewards. Are you up for the challenge as a Relic Seeker?

The newest slot from Microgaming casino software is called Relic Seekers and it's excellently presented across five reels with three rows and 25 fixed paylines. You will also appreciate the fact that the slot offers a plethora of magnificent bonus features to assist you in unlocking lucrative payouts and rewards, including scatter symbols, a Symbol Turns Wild feature, wild symbols, a Rolling Reels feature, multipliers, and free spins along with a jackpot bonus that will pay up to 90 times the bet size available in the base game.

The bronze lantern will represent the game's wild symbol and it will substitute for all regular symbols on the 5x3 reel structure, except for the game's scatter symbol. You will also be pleased to know that the new Relic Seekers slot comes equipped with a Rolling Reels feature, considered one of the main attractions to this new Microgaming slot. This feature basically allows all winning icons to be replaced by new icons that will fall onto the reel set from above.

The new Relic Seekers video slot from Microgaming impresses with a fantastic selection of symbols that all relate to the overall look and feel of the game. The character known as Free Man is considered the most valuable on the reel set, providing a hefty payout of 90 times your bet size when 5 are displays on an active payline. You will also find the character Nora and the character Professor Morgan on the reels as high-paying symbols. Apart from the characters, you will also be greeted by Tortas the dog and five wall carvings in yellow, pink, blue, green, and purple.

Although the slot is somewhat restricted in terms of non-adjustable paylines, you will still have loads of freedom when it comes to selecting your desired bet per spin. The new Relic Seekers slot has several coin values to alter your total bet size. This means you can either spin the reels for a minimum bet of $0.25 or you can increase the overall bet value to a maximum of $500.00 if you are feeling lucky.

Where to Play the new Relic Seekers Slot

The new Relic Seekers slot is available at all Microgaming casinos, offering a medium to high volatility level and a 96.03% return to player ratio. Before you explore the secret tomb hidden in the game, we strongly recommend that you claim a no deposit bonus to familiarize yourself with the payouts and bonus features before you play the new slot for real money.