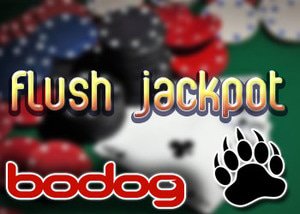 A Bodog jackpot has been won at their online casino and one lucky player from British Columbia has scooped a massive $397k.

The lucky player, known as Jerry K, hit a home run with the newest addition to the table games section. He was playing Let 'Em ride which is an easy version of poker. This table game which paid out the bodog jackpot is a simplified version of five-card stud and there are no opponents in the game. To win, all you have to do is get a pair of 10s or better. Jerry K, got a lot more than this and took home a massive $397,879 after he got the game's best possible hand which is a royal flush.

When Jerry began his game, his initial three-card hand set him up to the jackpot win. After placing a $5 ante bet, Jerry received an ace, king, and queen of clubs. The two community cards he received completed his royal flush with a jack of clubs and a 10 of clubs. Jerry had also placed the $1 progressive jackpot side bet which meant his royal flush won him the Bodog jackpot on top of the standard 1,000-1 payout that is given for the royal flush hand.

This is the newest edition to the table games section of the Bodog online casino and it's a quick and easy version of poker. It is available on both mobile and desktop and there are no opponents. Players can control the pace of the game as well as choosing whether to raise or check depending on the strength of their three-card hand and the two community cards. To win a payout in this game, players need to get a pair of tens or higher. If they land a top tiered hand they can also enjoy a progressive jackpot once they have made the $1 side bet at the start of the game. The progressive jackpot in Let 'Em Ride is an optional side bet of $1. If players get a Flush or higher, they get a payout. If they get a royal flush they win the progressive jackpot. If they get a straight flush they win 10% of the jackpot.

All new Canadian players who sign up for a real money account at Bodog casino can claim a 100% match bonus up to $600. This bonus cash can be used to play all the casino games you want including slots and table games. You can use it to try and win a Bodog jackpot by getting a royal flush too. You can also play a range of progressive jackpot slots games including 5 Times Wins Progressive, A Night With Cleo, Ares The Battle for Troy, Aztec's Treasure, Big Money Bigfoot, Birds of Fury, Bulletproof Babes, Crystal Waters, DJ Moo Cow, Food Fight, Gladiator Wars, Major Moolah, One Million Reels BC, and much more. There are plenty of regular promotions to avail of too and who knows, you could be the next lucky jackpot winner.