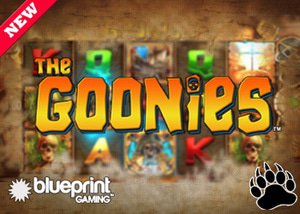 The latest slot from Blueprint Gaming is based on a popular adventure movie from the 1980's.

The Goonies slot is based on the American adventure comedy movie from 1985 which was directed by Richard Donner. The movie features a group of misfit kids that live in the famous Goon Docks area situated in Astoria, Oregon. The reels are beautifully portrayed across the old treasure map the movie is based on, while music and soundbites from the film dominate the soundtrack of the slot as a bunch of intrepid kids search for One-Eyed Willie's Treasure.

The 17th-century Spanish doubloon takes the role of the game's wild symbol and will stand on for all regular symbols to potentially generate a win, except for the game's scatter symbol. Displaying 5 Spanish doubloon wild symbols anywhere in view will award you with 500 coins. One-Eyed Willie will represent the scatter symbol in the game and is also the key to unlocking one of the One-Eyed Willie bonus features.

The slot also boasts with six different mini features which can be randomly triggered during the base game. The Truffle Shuffle Wilds feature will add extra wild symbols to the reels, while Mikey's Hidden Riches feature can transform certain reels to become completely wild. Data's Colossal Symbols feature will turn three adjacent reels to transform into one gigantic symbol, while Mouth's Lucky Coins feature comes with gold coins which will stick to the reels and turn into a matching symbol once the reels come to a stop. One-Eyed Willie's Bonus Boost feature will add additional scatters to the reels, while Sloth's Win Spin feature will guarantee a huge win when it's triggered.

Where to Play The Goonies Movie Slot

With a payout rate of 96.00%, the new Goonies slot can be enjoyed at a wide range of Blueprint Gaming casinos from 25 October 2018. Grizzly Gambling recommends that you play The Goonies slot at Betsson Casino where players are welcomed with a generous 100% bonus along with plenty of popular payment methods, incredible customer support, and a wide variety of casino games from other renowned software providers.