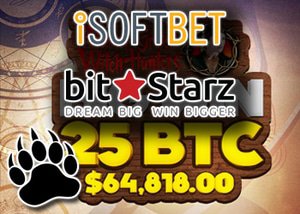 During the past week, the casino industry news was dominated by the announcement that a lucky Bitcoin punter scooped up a winning worth $64k while playing Hansel & Gretel at BitStarz Casino. The jackpot won is amongst one of the largest Bitcoin payouts and added to the popularity of the crypto currency now accepted at several online casinos.

The most recent win of $64,818 was achieved on iSoftBet's Hansel & Gretel: Witch Hunters video slots featuring ten paylines across five reels. The game has the ability to reward incredibly generous top wins worth up to 300,000 coins and several bonus features ensure that players enjoy cash rewards regularly during play. Previously big wins via Bitcoin includes an 11,000 BTC won in 2013 that was worth $1.3 million, which would have been worth 25 million now due to the rapid increase in Bitcoin value.

The big question is, do you have what it takes to defeat the coven? And the only way to find out is by spinning the reels of Hansel & Gretel: Witch Hunters video slot. Several bonus-empowered symbols come to players rescue in the form of wilds, scatters and extended wilds. Once the wild symbol appears, it unlocks the door to a wide range of winnings by extending itself to cover the entire reel. 15 Free spins could add up to 10,000 coins players bankroll provided they are brave enough to collect three scattered symbols, and by getting close to one of the main characters, vampire hunters could claim huge payouts worth 30,000 coins.

iSoftbet and their branded range of games have been created in cooperation with major brands such as Paramount Pictures, Twentieth Century Fox and Paramount Pictures has cemented its place as one of the most brilliant software developers. Licensed titles included Nacho Libre, The Love Guru, Rambo, Basic Instinct and Paranormal Activity.

Srdjan Kapor, Marketing Manager at BitStarz Casino was overjoyed by the number of wins members enjoyed from Amatic slots and was super excited to see that members now also enjoy massive payouts from iSoftBet, which he feels is an underestimated gaming developer who impresses with an array of games themed on movies.

Bitstarz Casino currently welcomes new members with a sign-up bonus consisting of 20 free spins, and no deposit is required. The welcome package worth $500 or 5 BTC plus 180 free spins features four deposit bonuses. The first bonus offers a 100% match of up to 1 BTC or $100 plus 180 free spins on Starburst, Fruit Zen or Boomanji video slots. The second deposit is rewarded with a 50% bonus worth up to $100 or 1 BTC; third deposits enjoy a 50% bonus worth 2 BTC or $200 and the fourth deposit unlocks a 100% bonus worth up to 1 BTC or $100.