Join In The 2 Year Party Celebrations - At The Bitstarz Online Casino! 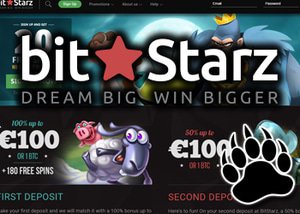 The Bitstarz Casino who were formerly known as Bitstars.net are certainly one of the more visually appealing bitcoin casinos on the internet and they offer an extensive range of games and bonuses with over 500 games taking in 3D slots along with Live Dealer table games.

One finds it difficult to believe time has flown so fast and it's already been two years since the Bitstarz Casino launched! To celebrate these great two years the casino is giving away 180 Free Spins along with 100% up to 1BTC for all new players who make a deposit. It's fair to say there's not been a better time to give them a try than right now. With these two special celebratory offerings, some incredible games to hand and excellent 24/7 customer support, this is an offer you won't want to turn down!

All winnings that players receive from their deposit Bonus plus their Free Spins need to be wagered 40 x before being able to cash out, and once the cashout button has been clicked, the player's money instantly appears in their wallet. No wonder this casino and their players have been steadily thriving since their 2014 launch!

Since that Bitstarz blast-off two years ago they have deservedly received recognition throughout the industry for their highly appealing gaming platform, ongoing promotions and payouts, and all new players are welcomed with an immediate 20 Free Spins followed by 180 additional Free Spins and a CAD $100 bonus, once their first deposit is made.

As well as classic table games and card games, since their launch they now prominently feature the addition of top gaming developer Betsoft's 3D slot games, and everything is nicely packaged with two ongoing weekly bonuses that they run every Monday and Wednesday.

Here is one of the most alluring casinos on the market for players wishing to test the waters of an online Bitcoin casino. They certainly don't spare any expense when it comes to eye-catching visuals, giving them a handy advantage over their competitors.

There are many casinos who choose to display their games directly from their homepage, however this casino has taken things one step further by including virtually all their game logos, new bonuses, ongoing promotions, plus the fact they also accept regular currencies such as CAD $ in addition to Bitcoins. Give them a go today and join in the Bitstarz Casino party celebrations, ready for some exhilarating Bitcoin casino fun?