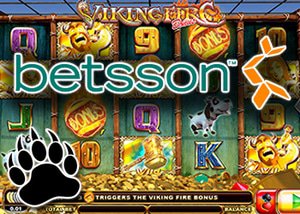 The game was designed and created to ensure the best possible gaming enjoyment will remain exclusive to Betsson until the 30th of November and until then members can enjoy the game for two weeks prior to the official launch across all platforms including desktop and mobile.

The Viking Fire slot features 40 pay lines filled with themed symbols such as shields, catapult rocks, enemy ships, male and female Vikings, several gold symbols and poker symbols carved from wood. A Viking warrior remains on the left side of the reels to cheer every win and his animated actions could also at times increase your chances of winning.

Several features are guaranteed to attract attention, including the Nordic background soundtrack; bright cheerful coloured cartoon style graphics and the innovative free games bonus round, while other bonus features also include wilds and scatters.

The free games feature is triggered when three or more bonus symbols appear and players get to participate in the reel action where sinking a ship awards free spins and additional wilds. Originally the feature activates by awarding 5 free games, more free games can be won during the feature and three additional wilds consisting of main symbols turned into gold could include a gold wizard, gold Viking princess or a gold male Viking. The wild symbol regularly appears to increase your chances of winning and all prizes are doubled when a wild symbol is part of any combination.

The co-Founder and director of Lightning Box software, Peter Causley shared their excitement regarding the launch and said that Viking Fire is inspired by a traditional Norse theme created with brilliant sound and visuals to compliment the light hearted take. The developer is delighted to offer Viking Fire Slot to Betsson Online Casino for two weeks before the official launch date since Betsson wanted to give its members an exclusive first to play advantage.

Betsson's Head of Games, Paul Malt, said that Viking Fire video slot is everything the operator hoped for and that they are super excited to offer the game to its players in advance of anyone else. Malt explained that they are searching for new games to add to the already impressive portfolio and that Viking Fire slot perfectly fits all requirements, the bonus features are particularly exciting and he felt confident that players would have endless fun while trying to take out the enemy ships.