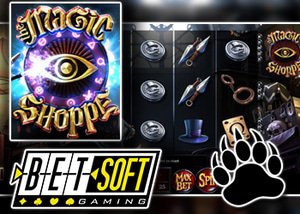 The all new Magic Shoppe slot impresses yet again with incredible 3D graphics and animations with 5 reels bringing the magic to life and 25 pay-lines capturing winning combinations.

While graphics remains their primary feature; the award-winning developer has also added great reward opportunities, including winnings up to 2,400 coins and bonus features such as wilds, a magic wand bonus, sun and moon free spins, and a magic-inspired gamble feature.

Betsoft casinos provide members with the latest slots based on the mysterious Celestial Boxes, offering a unique theme, but also surprising rewards as they unlock major winnings. The wilds are depicted by a golden ring and remain the primary focus during the standard game. While the standard magical symbols, the Celestial Boxes, skulls with glowing symbols, and the floating white hands catch your attention as they deliver added winnings and bonuses.

The magician's hands bring the wilds to life when at least three appear. These change golden rings and all celestial boxes in view wild, allowing for much bigger combinations. The wilds can assist in any combination by turning into the symbols needed to complete the win.

The real magic only takes place when the red or blue boxes appear in groups of 3 anywhere on the reels. The red boxes or sun boxes provide the sun free spin bonus feature, offering up to 12 free games. The blue boxes or rather moon boxes provide the same free spin bonuses when at least three are seen. In these free games, all spins guarantee winnings in each spin via combinations or by the activation of other bonuses.

V.P. of sales and marketing has announced that they are pleased to add the latest development to their collection at Betsoft Casinos and that the graphics and game features truly allow the mysterious mood to shine through in all of us. The team are also sure its uniqueness and functionality will capture the attention of their players while the free spin bonus remains a favourite for its guaranteed winnings. V.P. has also added that the feature might not produce massive winnings with each spin, but smaller rewards tend to add up quickly and the result is a handsome winning opportunity with each of the bonuses.

Betsoft has been among the top developers in the world with their incredible range of animations and ability to adapt bonuses to a specific theme. The Slots3 collection has been the most successful for the developer and a favourite at Betsoft casinos. Magic Shoppe will once again grab your attention and amaze with a new theme and interface while still presenting the fundamentals that make Betsoft a great developer.

When looking for a trusted online casino offering Betsoft Games and the new Magic Shoppe slot, we recommend Sports Interaction Casino. This highly regarded and established casino welcomes its new players with a generous 100% up to $100 bonus and complements that with regular promotions and a vast game selection that is powered by the world's best game developers. Register today!