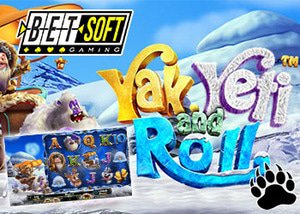 This new online slot machine is set on a 5x3 grid and has cascading reels that'll charm players with its adorable and lovable yeti creature that pops up on the reels to release fun features.

The new Yak Yeti and Roll slot powered by Betsoft Gaming casino software and is based on an Eskimo inventor and his a sidekick the Yeti. Together they set out on an adventurous journey that takes them away across the Arctic. Join the two as they make their way through the ice-covered landscapes and discover frozen treasures during your venture. Rewards can consist of instant payouts or accumulative multipliers that will be activated during subsequent wins on the reels. The brilliant graphics and innovate animations make the online slot entertaining and immersive as players spin the reels in the hope of a winning spin.

Joining you on your venture in the new Yak Yeti and Roll slot is the Eskimo character Yak, that is moving through the frozen landscape with his reindeer sledge. Players will meet Yak and his yeti, igloos and other fun symbols on the reels. Throughout gameplay, identical symbols will activate cascades. The minute a cascade occurs, the snowmobile will increase power and will allow Yak and Yeti to move further down their track where they are gathering prize rewards on the way.

Slot Yak Yeti and Roll are full of amazing features that include bonus spins where gamers can collect extra games during gameplay. To earn even greater rewards players can build up their reserves of bonus spins and multipliers to ensure a lucrative payout.

Where to Play Yak Yeti And Roll Slot