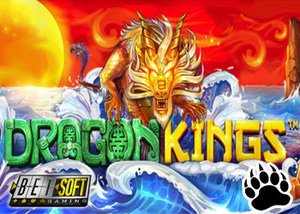 This online slot is bursting with multiple progressive jackpots, free spins, and uniquely designed special Dragon King Features. Continue reading to discover all you need to know about this superb slot.

The game was designed and developed by Betsoft casino software and have dedicated their latest invention to the mythical deities of Ancient China with the new Dragon Kings slot featuring 5 reels and 10 fixed paylines. This new offering presents players with loads of action and plenty of opportunities to win big - up to 280,753 coins.

It is said that many years ago, the ancient kingdom of China was ruled by mythical creatures that possessed great wisdom and power. Legend has it that these beasts controlled the four oceans surrounding China. Travellers passing by would show gratitude to these creatures for a smooth journey, or summon on their powers when conditions turned dangerous. Furthermore, these fire berating dragons were affectionate towards mankind and spoiled them with riches. In the new Dragon Kings slot, the four dragons are the most influential symbols. Each of them takes up a reel and each of them possesses their own unique powers that can swiftly adjust the fate and flow of your gameplay.

During your gameplay you will come across four high-value symbols that include: Jade, Koi Fish, Ingots and Coins as well as four playing cards icons that represent the low-value icons. In the new Dragon Kings slot, you will come across four wild symbols represented by the Azure Dragon, the White Dragon, The Red Dragon and the Black Dragon. Each of these dragons' wilds possesses its own distinctive power and will substitute all other symbols on the reels in order to create a winning combination, with the exception that this symbol is not a wild. The scatter symbol of Dragon Kings is represented by the Dragon Pearl.

Wagering is set at 10 coins per spin, then again the coin value can be altered, indicating that players can play for as little as £0.10 up until £10 per spin.

All of the Dragon Wilds present you with their own unique powers.

There is also a myth of a fifth dragon, whose power was so potent that he ruled over even the protectors of the seas. During your gameplay, the Dragon King depicted a golden, full-height animated character will show up next to one or more dragon symbols. When this occurs, their combined forces can multiply the gamer's total line wager up to 2,000x and will activate the sixth reel of the game into action - one-symbol reel that acts as the lair for the Dragon King's Magical Pearl.

The Magical Pearl is a vital symbol in order to gain access to one of four progressive jackpots: bronze, silver, gold, or diamond. The pattern of one dragon along with the King and the Pearl symbols will activate the bronze jackpot, whereas all four dragons coupled with the King and Pearl symbol will create a sea-change and reward the player with the upper-tier diamond jackpot. In addition, Magical Pearl can also reward you with for up to 50 spins during your gameplay.

Where to Play Dragon Kings Slot

New Dragon Kings slot was released at all Betsoft Gaming Casinos in July 2018 and is cross-device compatible due to it being built on the Betsoft Shift Platform, meaning that players can enjoy this game by playing it on any platform they choose. Grizzly Gambling highly suggests that you play this new slot at Spintropolis Casino where you can receive a warm welcome bonus of 200% match up to $1000 plus 20 free spins with no wagering requirements.