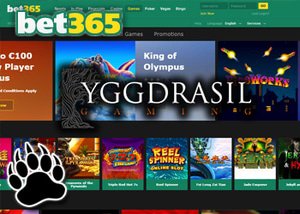 Bet365 has confirmed that it has now added gaming content from Yggdrasil Gaming to its portfolio of games. These have gone live and are available for play. The agreement was signed in February of this year and includes its full suite of games.

Yggdrasil Gaming is a perfect match for Bet365 Casino and the UK market as both have licenses in the UK and Gibraltar. The gaming content added includes some of Yggdrasil's most popular slots such as Cazino Zeppelin, Vikings go Wild, Chibeasties, Nirvana and the latest addition to their lineup, Legend of the White Snake.

As an added benefit to Bet365, the company plans to utilize the BOOST promotional tool as well as Infinite API™. Yggdrasil has an established history in providing leading casino operators with gaming content that is received well by players. They continue to release well thought out games that seem to defy many of the usual games that are released by other developers. This has seen their popularity and exposure increase, which has led to agreements such as Bet365 turn fruition.

Bet365 is a household name in many countries around the world, and not by mistake. The company has been established online since 2001 and offers a multi-platform that includes poker, Vegas games, bingo, financials, in-play sports, sports betting as well as a casino. In addition to Yggdrasil Gaming, Bet365 offers gaming content from Microgaming, NetEnt, Playtech, Leander Games and many others. They include an extensive library of games and generous promotions are part of their marketing objective.

Yggdrasil Gaming was founded in 2013 and are based in Malta and include development offices in Krakow, Poland. The company provides mobile and online casino games such as slots, keno, progressive jackpots, scratch cards, lotto games and makes these available for multiple platforms.

Yggdrasil have won a number of awards including Slot Provider of the Year at this year's EGR B2B Awards. In additional awards have been received for Software Rising Star and Gaming Software Supplier of the Year. Yggdrasil have created innovative software such as iSENSE 2.0, that helps to launch gaming content on both mobile and desktop. They also released software that helps customer's award free spins to their players.