Bet365 Adds the Family Guy™ Video Slot to its Lineup 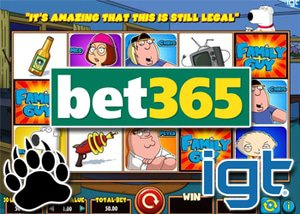 You're "lucky there's a Family Guy™" video slot at Bet365 that features all of your favorite characters from the show.

You'll laugh so hard it'll make your ribs hurt, and you can win a sizeable jackpot all at the same time with the Family Guy™ video slot from IGT at Bet365 casino. The Griffin family is back with its hilarious antics, but instead of simply making you laugh until you cry, they can also help you line your pockets with a sizeable sum of cash.

The Family Guy™ video slotboasts five reels, 30 paylines, and various members of the Griffin family to provide you with some fantastic rewards along the way. The World Bonus offers you the opportunity to win some terrific prizes, and you can trigger this by obtaining three of the Bonus icons anywhere in the three center reels. What's more, there are three unique bonus rounds with their own character themes. For instance, there's the Chicken Fight bonus that is all about Peter's longstanding feud with a chicken the size of a grown man, the Drunken Clam bonus which pays homage to Peter's favorite place to have a beer, and even Lois's Hot Free Spins Bonus during which a sultry Lois coaxes you through a number of free spins packed with prizes.

Of course, this isn't the end of the special features by any means. You'll also be able to enjoy Peter's Random Credits during which Peter appears on the reels, lets out a series of loud farts, and credits you with quite a bit of money. There's also Meg's Multipliers, during which Meg's icon simply multiplies your win by a set number. Chris can randomly turn other icons into wilds when he appears on your screen, Lois acts as a scatter and pays any when she appears at least three times anywhere on the screen, and Brian provides the extra cash wins that can truly make your day.

You can wager anything from $0.10 to $100 per spin with this title, and the jackpot climbs up to $100,000 if you're lucky enough to win. If you're tired of the traditional video slots with their repetitive gameplay and boring themes, try the new Family Guy slot at Bet 365. There are so many different features and bonus rounds that no two experiences will ever be the same.