The Jane's Farm Slot from Arrow's Edge is Here! 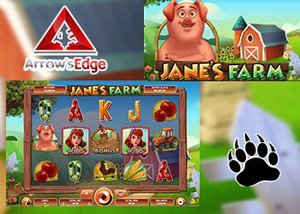 Arrow's Edge Casinos are proud to announce the release of the new Jane's Farm slot. This farming themed video slot is one that will draw much attention.

The game is played on five standard reels and there are 21 paylines. Players can enjoy multiple betting options when they are spinning and they can also preview the game in a free play version.

With Jane's Farm, there are many ways to win with base game combinations and larger payouts will come from the amazing bonus features that have been added. This game can be played for real money bets that range from $0.02 per payline to a maximum bet of $252 per spin.

As soon as players access the game, they will see some bold graphics and appealing colours. The reels are set in a farm scene and with every spin, a group of chickens will walk by the reels. The game symbols are all thematic and players will see icons like Jane, a tractor, corn, hound dog, cow, milk bottle, chicken, tomatoes, weather vane and a pig. There are also standard playing card icons in use, which will make up the lower paying combinations on the reels.

The new Jane's Farm slot is very easy to play and all controls are at the bottom of the screen. Here, players can alter their bet amounts before any spin or they can use the Max Bet button to place the largest bet based on the selected coin denomination. Players can also engage the Auto Play feature, where they can play as many as 50 spins at a set bet amount without having to manually control each spin. Players will also be able to toggle sounds on or off to suit their preference when playing.

As with many of the great slots that have been created by Arrow's Edge, the new Jane's Farm game comes with some fantastic features that can boost payouts. There is a standard wild that can take the place of regular symbols to create more winning combinations and there are also two bonus symbols, the cow and the chicken. When three or more cow icons appear anywhere, players will get 10 free spins and can retrigger the feature.

The Chicken Coop bonus will be triggered by three or more chicken icons. The screen will then change to the chicken coop and tree chickens will be in their nests. There are five different holes and each has a cash prize attached. Players will just have to click on a chicken to release an egg that will drop into these holes, awarding great prizes.

The new Jane's Farm slot also offers the Milk Bottle Feature, where players will collect milk bottles during free spin rounds. This will offer three more free spins when three bottles are collected. If players get six bottles, they will get three spins with a triple multiplier.

Where to Play Jane's Farm

This new and exciting slot game can be enjoyed at Arrow's Edge Casinos online and there are a number of great sites that are now featuring this new game release. One of the top casino choices for those looking to enjoy this game is Gossip Slots Casino, where players can preview the new titles in a free play version and they start placing real money wagers.