All 30 NBA Franchises Worth $1 Billion For the First Time 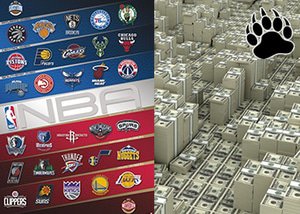 Lucrative television deals in the United States and international growth are underpinning the growth of basketball with franchises now worth a staggering $1.65 billion on average.

That's a 22% rise over the course of 12 months, and every single team is worth at least a billion for the first time in history. Franchise values have managed to triple over the last 5 years with credit being given to the league's economics which is considered the best of any other major U.S sports league.

It's not shocking anymore to imagine a sports world where NBA teams are worth more than the NFL franchises. Internationally, the NBA has potential to grow than the NFL who have struggled outside the United States. The revenue of the NBA outside the United States, on the other hand, is growing at a rapid pace annually. An average NFL franchise value is worth $2.5 billion which is around 52% more when compared to a typical NBA team. However, the spread has been reduced to more than half in the last 5 years. In fact, the NBA has already started selling at higher multiples with recent deals for the Houston Rockets and the Brooklyn Nets value the teams at around 8 times their regular season revenue whereas NFL franchises are worth 6 times the revenue.

In China, where basketball is enjoyed by approximately 300 million people, the NBA managed to sign a five-year deal in early 2015 for Tencent to advertise matches and other NBA content through its digital platforms. This exclusive deal has been a major success and is expected to earn the NBA over $800 million and negotiations for an extension already in the pipeline. The NBA has 34 marketing and media partners in China along with 144 million followers on social media channels, which is more than any other sport.

NBA China launched 10 years ago and is currently worth over $4 billion. There is continuous growth in all lines of business, including merchandise, sponsorships, or content distribution. The consumption of the product and the NBA in China continues to grow which is truly driving the valuation of basketball in China. This also explains the NBA's recent transactions at sky-high valuations. The price for an NBA franchise is around 10 figures. However, a big market team will cost you at least $2 billion. In October, the NBA approved Tilman Fertitta's bid for the Houston Rockets at $2.2 billion. The bid was a record for an NBA franchise, but it will soon be exceeded. Mikhail Prokhorov is on the brink of selling 49 percent of the Brooklyn Nets to Joseph Tsai, a Taiwanese billionaire. The deal is worth $2.3 billion and doesn't include the operating rights for the Barclays Centre.

The Most Valuable Teams in the NBA

The New York Knicks are considered the most valuable NBA franchise for three consecutive years. The Knicks are currently worth $3.6 billion, which is 9% up from last year and ranked sixth highest across all sports in the world. The Knicks are continuously profiting thanks to the $1 billion renovations to the Knicks' home ground, Madison Square Garden, producing new revenue prospects from seating and sponsorships.

The Los Angeles Lakers have been struggling on the court the last few years. Their last four seasons have ranked them among the 5 worst in franchise history when it comes to winning percentage for the Lakers. However, they continue to mint money thanks to almost $150 million a year from radio and local TV deals. This places the Lakers as the second most valuable NBA franchise at $3.3 billion, which is 10% up from last year. The Golden State Warriors surpassed the Chicago Bulls to be ranked third most valuable franchise at $3.1 billion, which is 19% up from last year. Rounding up the five most valuable NBA franchises are the Bulls at $2.6 billion along with the Boston Celtics at $2.5 billion.

Toronto Raptors fans can rest assured that their team did extremely well in the rankings this year. They continue to move in the right direction, ranking this year in 12th position. In 2014, they ranked 18th, in 2015/16 they ranked 14th, and in 2017 they ranked 13th. The Toronto Raptors have been assisted financially, going on the most consistent and best run in franchise history. In the last 4 campaigns, the Raptors set regular season win records on 3 occasions, clinching three Atlantic division titles as well as qualify for the playoffs 4 times. They are currently valued at $1.4 billion, which is 8% up from last year. This will certainly play a significant role in terms of betting on sports in Canada going forward.