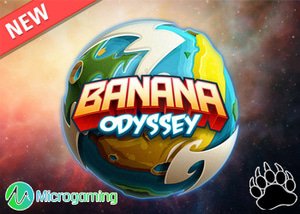 Following a striking line-up of slot titles at ICE 2019, which will be released throughout the year to keep players intrigued, Microgaming decided to wrap things up by revealing their latest slot creation called Banana Odyssey. The phenomenal software provider revealed its brand-new space-themed slot during the final day of ICE 2019 which was accompanied by cosmic space dancers and simian space antics which managed to take players on an intergalactic voyage to promote the theme of the slot.

The new Banana Odyssey slot was developed exclusively for Microgaming casino software by Slingshot Studios who is an independent game studio who develops exclusive content for the world-renowned software provider.

The new Banana Odyssey slot developed by Slingshot Studios and Microgaming will follow two astro-chimps on an unforgettable space-race to claim fabled riches on Banana Planet. The latest slot will feature 5 reels with 3 rows and will be packed with exciting features to keep players on the edge of their seats, including a free spin feature, a respin feature, and expanding wilds to make it as entertaining as possible.

Apart from the glorious bonus features, the new Banana Odyssey slot will also boast with a wide selection of betting options, cartoon-styled symbols, a fantastic soundtrack and sound effects on each and every spin, as well as an extraordinary range of payouts while players attempt to complete their mission in outer space. The new slot will be exclusively launched to Twin players for a period of two months before it's revealed at other Microgaming casinos.

Where to Play the new Banana Odyssey slot

Although we don't have an exact date on when the new Banana Odyssey slot will be released at Microgaming casinos, we at least know that it will be later this year. Once we have more information on the bonus features and release date, we will update you accordingly. Once the slot is released, you'll be able to play the new Banana Odyssey slot at Jackpot City Casino where you'll be welcomed with a 100% match bonus up to a maximum of $1,600 spread across your first 4 deposits. Terms and conditions apply.