888 Holdings Announces Debut in Ontario After Getting A License 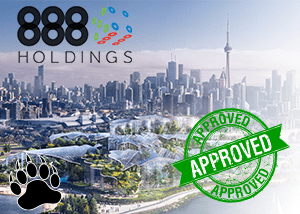 888 Holdings applied for an Ontario license as soon as word spread that the Canadian government was amending gambling laws affecting Ontario. The company proudly announced that it had received approval from iGaming Ontario, the new subsidiary of The Alcohol and Gaming Commission in charge of regulating online gaming operators in the province. Following the announcement, Canadians residing in Ontario will soon access 888 Holdings proprietary software and loads of casino games, international sports betting markets, poker games, and tournaments.

888 Holdings will share Ontario with other big brands which have expressed interest in expanding to Canada. Stiff competition is expected from operators like Spintropolis Casino, BetMGM, and Bet365. By expanding to Ontario, 888 Holdings hopes to take advantage of the raw market, that aligns with the company's growth strategy focusing on regulated and emerging markets.

888 is a well-known brand that has built a reputable name worldwide. Therefore, the move to Ontario will be nothing new for the owners and marketing team. Getting approval to operate in the province was only the beginning. The uphill task now is making sure that 888 Holdings tops the ranks by appealing to the hearts of avid gamers in Ontario. One way the operator can entice new players to join the casino is by offering no deposit deals after registration. This strategy has led to many other brands succeeding in different markets.

888 Holdings already owns large shares of vibrant gaming markets such as the UK and the US. In fact, the Ontario market brings the total subsidiaries under the company to 19. Serving players across all those regions is dependent on partnerships with the likes of Yggdrasil gaming to supplement the proprietary games offered by 888 casinos.

Going by the statement from 888 Holdings' CEO, the company sees a huge potential in the Ontario market. It is grateful for being among the first operators who received a green light to set up shop in the province. He further emphasized the company's keen interest in growing within regulated markets like Ontario by strengthening its presence and offers to players.

Lessons from Past Mistakes in the UK

888 Holdings subsidiary in the UK suffered a blow after the UK Gambling Commission found it guilty of misconduct and fined the company $12.5 million, payable to the regulator. The case against 888 UK Limited revolved around money laundering and failure to follow social responsibility guidelines.

The allegations against 888 holdings included accepting huge sums of cash from customers without proper background checks. This happened during the COVID-19 pandemic that rocked the entire globe. Several 888 members deposited as much as five-figure amounts within days, which would raise eyebrows in any reputable casino in Canada. However, none of the employees working in the finance department at 888 Holdings raised the alarm. The case included offenses surrounding maximum deposit limits close to a player's monthly earnings. Lastly, an audit of user accounts revealed that some individuals had registered more than one account, a serious offense in the eyes of the regulator. Having learnt their lesson, 888 Holdings operations in Ontario will be closely monitored to ensure that a repeat of the same mistakes does not happen.