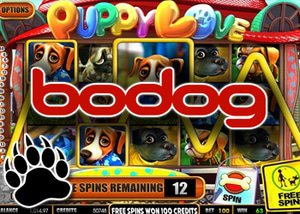 Get ready to fall in love with the brand new 3D slot release from Betsoft Gaming called Puppy Love. Available now at Bodog casino where you can get up to $600 in bonuses.

Betsoft Gaming's new Puppy Love 3D slot has been released at Bodog Casino. This puppy themed slot is sure to appeal to dog lovers everywhere with its 5 reels and 20 paylines. It features a little puppy with big brown eyes that will pull you in within seconds. This title uses 3D graphics and features six different dog breeds, dog bowls, leashes, and a puppies for sale sign. When you hit a winning combo, one of the symbols will expand and show a short animation involving the dog pictured. Get three or more scatters and you get free spins which can be retriggered. There is a Puppy Store bonus round where you get to adopt your new best friend. This new title has some great features including free spins, wilds, stacked wilds, and a great pick-em bonus game. There is plenty of entertainment to be had and a chance to win up to 40,000,000 coins.

If this sounds like fun, remember that all new Canadian players can get $600 in welcome bonuses when they sign up with Bodog.

In other news, Amaya Gaming have announced that they will be appealing the $870 million judgement in Kentucky. A judge in the state ruled that PokerStars should pay Kentucky the massive sum for allowing approximately 34,000 Kentuckians to spend money on the site from 2006 to April 2015. Amaya have stated that the damages award "is notable only for its absurdity." PokerStars stopped allowing Americans to play on their site when the federal government indicted its founders. PokerStars however settled their case with the federal government in 2012 for nearly $731 million and thanks to this settlement which also included PokerStars acquiring former rival Full Tilt Poker, the company received $4.9 billion in its sale to Amaya.

Amaya have stated that they will be turning to the founders of the site if the Kentucky judgement isn't successfully appealed and that they intend to seek recovery against the former owners of the PokerStars business. The appeal process will begin in January.

Amaya lawyer Marlon Goldstein said, "This is a frivolous and egregious misuse of an antiquated state statute to enrich the contingent-fee plaintiff's attorneys hired by the Commonwealth and not the people of Kentucky." He also went on to say that, "given that PokerStars only generated gross revenues of approximately US$18 million from Kentucky customers during the five years at issue, a damages award in excess of US$800 million is notable only for its absurdity."

Following on from the Kentucky court fine of $870 million, Amaya Inc. stock hit a new 52-week low. Amaya, a Montreal based gaming company bought PokerStars in 2014 and the purchase included US$300 million put in escrow by the previous owners to deal with this case that had already been filed before the agreement was made.

Because of the ruling, Amaya stock hit a 52-week low of $16.51 after the news of the ruling broke but then it recovered to $17.50, down 98 cents or 5.3 per cent at close of trading the same day. Amaya's stock peaked at $37 earlier in 2015 before losing a quarter of their value in early November after the company said the strong American dollar was hurting the purchasing power of its customers.

Amaya's online gambling brands include PokerStars, Full Tilt, and StarsDraft, and the company also has licenses to offer its games in more than a dozen countries across Europe as well as Quebec. PokerStars and Full Tilt have also received a license to operate in New Jersey and Amaya said that PokerStars will launch there sometime in the first half of 2016.