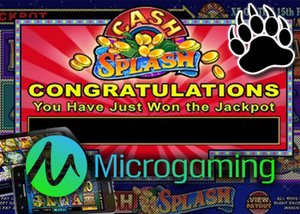 June has been a busy month for Microgaming progressive jackpots with over $568.1K paid out over the entire month making it a great summer for plenty of players. Below we have the details on the top 5 Canadian progressive jackpot winners for June 2016.

Over $568.1K has been paid out during the month of June on Microgaming jackpots and Canadian players are among the big winners. Cash Splash has paid out a total of $286.8K while Mega Moolah has paid out $188.5K. Treasure Nile also featured in the big Microgaming slots wins paying out over $92.8K. With those figures in mind, let's take a look at how much Canadian players took home during the month of June.

The biggest wins for Canadian players have come from once again come from Zodiac Casino - one of our most recommended casinos. Zodiac are part of the Casino Rewards Group and all their games can be played on their mobile casino too. The month of June saw them pay out a massive $273.3K with $114.5k of this going to Canadian players.

If you don't already have an account with Zodiac Casino, you might want to consider signing up as a real money player. They have a great sign up bonus for all new players. Sign up today and deposit just $1 to receive $20 in free casino cash. They also run lots of regular promotions and are licensed and regulated by the Kahnawake Gaming Commission.

Microgaming have the largest progressive jackpot network and the great thing about their slots games is that they can all be played on mobile devices as well as desktop PCs. There were plenty of mobile gaming winners in June too. Cash Splash mobile winners included D.M from Canada who won $7.9k on her iPhone. K.S also from Canada won $36.2k on his iPhone, while P.D from the Netherlands won $18k on his iPad. H.K from Germany won $26.5k on his Android phone and this was from a purchase of just $22. Mega Moolah is probably the best known Microgaming progressive jackpot and June also saw some great wins. M.D from Luxembourg won $38.8K on her iPhone with a purchase of just $25. K.K from Germany won $16.8k with a purchase of just $1.

What are you waiting for, make sure you are signed up with a Microgaming casino like Zodiac Casino and you could be featured in the July progressive jackpot pay outs.