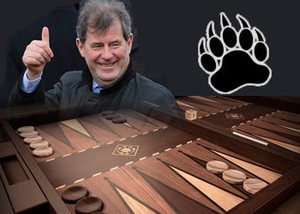 Back in 2004 gambler and billionaire, JP McManus along with Ireland's cult racing figure John Magnier hit the headlines when they sold their 28.39% holdings in one of the world's richest football clubs Manchester United to Florida-based Malcolm Glazer owner of the Tampa Bay Buccaneers, for an estimated $326 million. Fast forward to 2016 and JP McManus is in the news again, this time trying to recoup taxes paid to the IRS on winnings from a 3 day Backgammon marathon with American billionaire Alec Gores, and a small matter of $5.2 million which he says is rightfully his.

The epic 3 day Backgammon marathon took place back in 2012. When the game was over the two billionaires settle up with Gores withholding $5.2 million out of McManus' $17.4 million winnings to pay off the IRS. As one might imagine, this all sat well with the IRS, however not so with McManus who was having none of it.

Mr. McManus claims that since he had paid a flat charge of 200,000 Euros to the Irish government that year that he is entitled to a refund of $5.2 million as his winnings can't be taxed twice due to a double taxation treaty between Ireland and the US. This means that he can only be taxed in one of the countries and he had paid his taxes in Ireland.

Mr McManus and his attorneys argument is that he can't be liable for taxes in the US as he had paid a "domicile levy" in 2012 to the Revenue Commissioners in Ireland. This is a flat charge of 200,000 euros paid by those whose permanent home is in Ireland, whose global income exceeds 1 million euros, have Irish property worth at least 5 million euros, and who's tax liability to the Irish government is less than 200,000 euros, in the said year.

The IRS in a written motion put forward to the United States Federal Claims Court argued that the "domicile levy" that was paid by Mr McManus in Ireland does not infer he gets the benefit he and his lawyers are suggesting from the cross border double taxation treaty. He was not a tax resident in Ireland during the year of the 3 day Backgammon marathon they claim, and no tax liabilities were due to the country that year on his worldwide income, nor did he file an Irish income tax return for the year. "Accordingly, he did not qualify as a 'resident of a Contracting State' whose gambling income was exempt from United States tax under the Treaty," the American IRS lawyers claimed.

According to US court papers the IRS were told by their Irish counterparts that McManus had not been registered for income or capital gains tax in Ireland since 1995. However the signature of the person/persons and other pertinent details has been redacted, and the IRS refuse total release. McManus is pushing for full disclosure and to "investigate and take the deposition of the persons in Ireland who claim to have written it". The case continues.