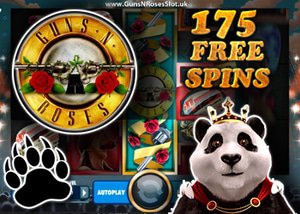 Royal Panda has announced that it will provide its players with up to 175 free spins on the Guns 'n Roses slot machine from Net Entertainment starting on January 21st.

The Guns 'n Roses slot from software developer NetEnt is expected to be a huge hit at Royal Panda and other internet casinos around the world. According to Royal Panda, the only thing better than spinning the reels to the sound of Guns 'n Roses is getting an opportunity to play free, and that's exactly what the casino is doing.

It seems that frontman Axl Rose and guitarist Slash have repaired their relationship. Guns 'n Roses has announced that it will begin touring again, and fans couldn't be happier. For more than 30 years, the band has given its fans epic tunes like "November Rain", "Paradise City", and "Civil Wars" across multiple albums. Now, thanks to Net Entertainment, fans can enjoy the band in a brand new manner - on an impressively-designed five-reel video slot machine.

To kick things off with a bang, Royal Panda plans to offer up to 175 free spins and the trip of a lifetime to one lucky player starting on January 21st and ending seven days later. During this period, anyone who plays 25 real money spins on the Guns 'n Roses slot will receive 25 free spins as a reward. Those who receive the reward all seven days can get 175 free spins in total. What's more, the casino is also handing out a pair of tickets to see Guns 'n Roses live in concert along with return flights for two to a tour city, a three-day hotel reservation, and a personal limousine on the night of the concert. Very few casinos give out promotions like this, and Royal Panda is setting the bar high for the game's release.

How the Promotion Works

Royal Panda will provide the free spins incrementally, automatically depositing 25 spins into each player's account who successfully plays 25 real-money spins before midnight GMT+1. These free spins will be awarded on the day following the real-money spins before noon GMT+1. All players need to do is log into their accounts on the following day to take advantage of the spins, and each person who receives the reward will also be entered for the chance to see the band in concert. For new members, Royal Panda will double the initial deposit up to $100, as well.

About the Slot Machine

The Guns 'n Roses slot machine from Net Entertainment boasts five reels filled with icons that will take fans back to the 1980s, when the band first burst onto the scene with its heavy electric guitars and unique vocals. Icons include Axl himself, Slash, skulls with roses, and even golden poker symbols paired up with red roses in full bloom. There are several unique bonus rounds for players to enjoy, and these include the Crowd Pleaser bonus, where players pick and click the instruments that made the band's music so popular to rack up the wins.

Guns 'n Roses certainly made an impact on the music industry, and their fans are ecstatic to see them back in action. The Guns 'n Roses slot machine from NetEnt captures their style and music completely, and fans can not only win a huge jackpot, but they can also enjoy up to 175 free spins and a chance at the trip of a lifetime when they play at Royal Panda Casino between January 21st and January 27th, 2016.