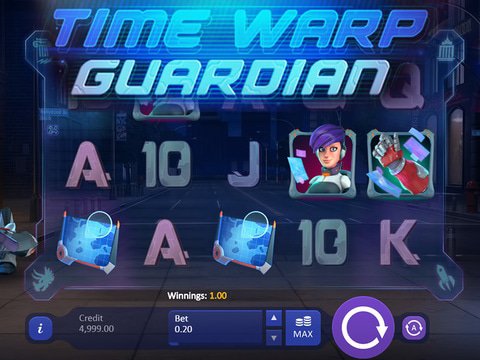 Step into the future and warp yourself into space as you unravel the secrets of the galaxy and win exciting rewards in Time Warp Guardian slot machine. Let us travel into the future and complete different intergalactic missions as you land winning combinations on the reels to win big prizes. Get special assistance from your guardian buddy throughout your journey on this free play slot game which you can now try with no download requirement.

This five reel slot game developed by Playson software is one of the prominent 243 Ways to Win games available in the market today. Online and mobile players may place wagers for as low as 0.20 credits up to a maximum stake worth 60 coins per payline. Since you have 243 ways to win, it is best to play with the maximum available wager for all lines to land big on the reels.

Your mission is to land character combinations on the reels to acquire different amounts of winnings. The lowest paying symbols are the usual playing card characters which reward you up to 225 credits The futuristic space map and the hand of the cyborg symbols pays you up to 450 coins per line. While a complete line of a tentacle from a mysterious space creature rewards you with 600 credits. The highest paying character belongs to your fearless lady guardian which pays you with 900 coins.

The special wild symbol represented by a block of a stone replaces any character on the reels to complete a winning line. However, it only appears on the first and fifth reels. Aside from this replacement, it also has exclusive features which will excite you.

As mentioned above, the wild character also has other exciting features for players of Time Warp Guardian slot machine. When you land two wild characters on one reel - either reel 1 or 5 - you will trigger the Sticky reel feature which activates an instant re-spin with the wild-bearing reel remains on the game screen.

Moreover, when you land 4 wild symbols on the reels, it will trigger the special Time Warp feature. During this bonus round, your screen will be split into two game fields with a 3x3 grid. You will also acquire 5 bonus spins which you can use during this feature. Symbols will be limited to high paying characters only giving you more chances on winning big. Also, all identical characters mirroring on both screens will be shifted into wild symbols.

You may also win additional free spins when you land two matching Era Holograms - represented by a triceratops, column, and spaceship characters - on both screens. Get rewarded with 8, 10, or 12 free spins respectively and activate special in-game features from these Era Holograms.

If you are looking for other "out of this world" games, you can also try Habanero's Galactic Cash Attack slot machine. In Galactic Cash Attack, you play with five reels of 20 paylines to win the whopping jackpot worth $7,500. You can start spinning the reels for as low as 0.01 coins on your wager line.

You may now try Time Warp Guardian's demo version in Slots Million Casino with no registration required. Canadians can also play on this site to get exclusive no deposit and free spin bonuses.