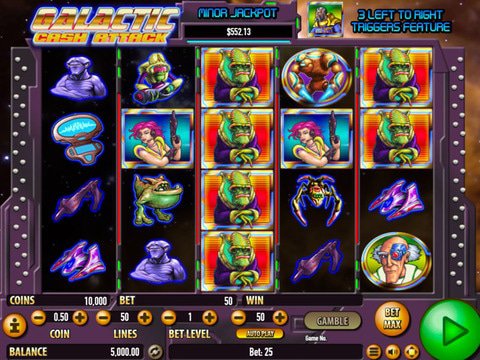 Inside every human being is the unquenchable thirst for superiority and of course, the undying curiosity. As a result, we've traversed far more than any other life in the planet and we still strive to make it even better by going out into space and traversing the stars and the celestial space. It's a very thrilling adventure that even wagers would surely be able to relate to and there's no doubt that you'll love it as well when the amazing Galactic Cash Attack Slot Machine of Habanero takes flight and bring you to the moon, space and beyond. Take a glimpse of the wonderful place beyond the horizon and try out the Galactic Cash Attack Free Play Slot Demo in this page. It's free from hefty risks and no download and no registration is required, which simply means you've got nothing to lose if you want to give it a try. You may even find that it's fitting for your favorites list just like how many Canadian players found it.

The moment you step inside the world of the Galactic Cash Attack Slot Machine, you'll be welcomed by its retro-like visual graphics that's visually appealing in its own right. Accompanying its visuals is the mysterious, celestial audio at the background that binds the elements of the game together, making it more immersive than any other slots you may have already encountered in the past. The symbols themselves come in a rather futuristic set, combined with a retro appeal that makes it look breathtaking. There are no common card symbols here - everything is related to the game from the low-paying symbols up to the high-paying ones which you can refer to in the pay table. Gear up as you'll sooner or later get the jackpot of the game that's about $4,000, as special symbols like the Fighter Girl Wild Symbol as well as the Alien Leader, will help you achieve a victorious ending to every spin you make. There's also the Habanero's exquisite Gamble Feature, giving you the chance to fold your winnings twice for a more glorious homecoming to Earth.

If you're up for yet another exciting fight against galactic monsters or aliens, then you could also try and play the World Match famous game, Space Monsters. This 5-reel and 20-payline game inclines more to the cartoon kind of art, but even though it has quite a modest graphical aspect, it comes with a whopping $7,500 jackpot that's pretty hard to resist for wagers. It also makes use of various special symbols from scatters, wilds and more to give you a better chance of getting its lucrative treasure.

Experience the world beyond at its finest when you play the Galactic Cash Attack Slot Machine at the prestigious establishment of Club Gold. This is a casino that's truly worthy of its esteemed position as it provides both instant play and download play version for the convenience of its players while providing promotions for its users' benefits. Though free spins bonus and no deposits bonus at the initial point is out of the discussion, it still has the lucrative dollar-for-dollar match-up that can go up to $2250. With its reputable status plus this various benefits, it's plain to see why it's the best spot to play your slots machines.