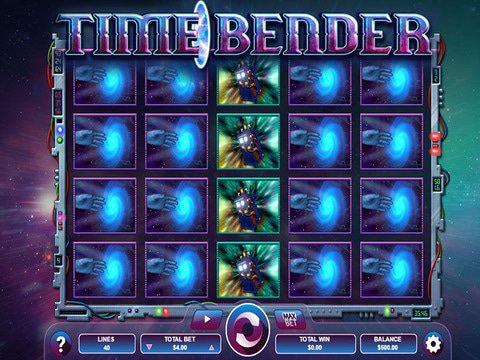 Unleash your time-bending abilities and simultaneously travel back and ahead of time in this new slot game developed by Arrows Edge software. In Time Bender slot machine, you get to time travel into the past and the future to win loads of cash rewards from both timeframes. Collect regular and themed characters on the reels to earn various payout amounts. Look out also for special symbols as these grant you bonus spins and extra prizes. You can now experience this time-warping action in this free play slot available here with no download required.

This five-reel slot has 40 fixed paylines for its online and mobile players to wager on. You can place stakes for as low as 0.01 coins up to 1 credit per spin. There is also an autoplay option on the reels which allows you to set as much as 50 automatic spins per round.

Time Bender slot machine has various reel icons on the screen which pay different payout amounts. The least paying symbols belong to the classic card characters of J and Q which reward up to 20 credits; while the letters K and A grant you as much as 35 coins. There are also rewarding themed symbols you need to locate on the screen.

These include an image of a hand passing through a vortex which rewards you up to 100 credits. The icon of a time travel machine grants you 150 coins at most when you land five of this symbol in one line. Meanwhile, the highest paying character is a silhouette of a mysterious time travelling man which wins you as much as 800 credits.

You should also look out for the wild symbol - represented by an image of the vortex - which substitutes to any character, except for the bonus symbol, on the reels to complete a winning line.

In terms of its bonus features, Time Bender has a special Highlight Feature which is automatically triggered on the reels. This bonus feature randomly highlights specific positions on the second and fourth reels in your every spin. If reels 2 to 4 are completely highlighted, you will be rewarded with free re-spins also known as the colossal symbols re-spin.

During this re-spin, there are certain characters from second to fourth eels which are contained while reels 1 and 5 are spinning. This can rack up your total winnings after this bonus round feature.

Warp to Other Dimensions

Let us time warp into another dimension with Playson's Time Warp Guardian slot machine. Launch yourself into outer space with Time Warp Guardian's five-reel gaming which has 243 paylines for its players to wager on. Complete combinations of futuristic symbols like the space map, cyborg hand, and space creature to win various cash rewards. Get to also meet the valiant lady guardian on the screen as she will guide you in your missions in winning huge payouts and special bonuses.

You can now try Time Bender's demo version gaming at Gossip Slots Casino with no registration required. Canadian players are also encouraged to place their real money wagers here to get free spins and no deposit bonuses from the site.