Man of Steel
Enjoyed playing this game?
Rate it → 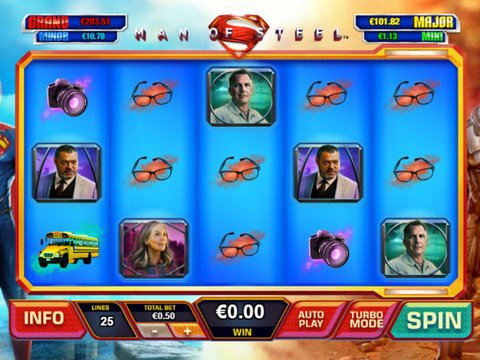 It is not a bird, nor is it a plane. It's the latest video slot based on the comic book hero Superman featured in the reinvented superhero film released in 2013. The game is called Man of Steel free play slot, and it's a reboot of the original Superman movie series that reiterates the origin of Clark Kent. He quickly learns that he is an alien with superpowers from the planet Krypton and takes on the role of mankind's protector, having to save the world from General Zod who wants to destroy humanity.

Developed by Playtech, the Man of Steel video slot invites Canadian players as well as global players to experience a 5 reel, 25 pay line action-packed game with symbols taken directly from the movie. The symbols include Clark Kent's black-rimmed glasses, his letter box, a high-definition camera, a school bus, a copy of the Daily Planet newspaper and a fighter jet. Characters joining the spinning action include Diane Lane, Kevin Kostner, Lawrence Fishburne and the famous Superman logo paying the highest jackpot bonus worth 1,000 coins.

The Man of Steel video slot can be enjoyed on a wide variety of platforms including Desktop, Mac, and mobile devices including Android and iOS such as iPhone and iPad. You can also play a free demo of the game where no registration and no download is required while familiarising yourself with the game's several bonus features and cutting edge graphics and sound effects. Man of Steel boasts a great selection of betting choices with a minimum bet of $0.02 while the maximum bet per spin can be increased to $100.00 for the high rollers out there. The game also comes with a rather high return to player percentage ensuring frequent payouts for all slot enthusiasts.

Special symbols include five potential wild symbols including a standard wild symbol, General Zod, two of his trusted warriors and Superman himself. You will also discover a vast selection of bonus features including General Zod vs. Superman Shifting wilds feature, occurring whenever Superman or General Zod make an appearance on the reels. Superman will move one position to the right on each subsequent spin, and General Zod will move one position to the left until they drop off the reels. Battle for Earth free spins feature is triggered when General Zod and Superman shifting wild symbols land on the same position. Superman will then battle it out with General Zod and his two warriors. When the Man of Steel lands next to General Zod or one of his gang members, they will fight and create extra wild symbols to boost your winning chances. The free spin feature will continue until one Superman is defeated.

The Krypton free spin feature is activated when you display the Krypton Bonus scatter symbol on the fifth reel. You will receive 7 free spins taking place on a new set of 50 pay line reels, and higher valued symbols will be featured. Jor-El will act as the wild symbol and will be frozen in place when he lands. He can create up to 10 frozen wild symbols, and it will also be possible to re-trigger the free spin feature. The World Engine bonus feature is triggered when landing the bonus symbol on reel 5. There will be a huge explosion taking place on the screen, revealing up to 7 additional wilds, creating a new payout with the additional wild symbols in place. Lastly, the game also features 4 potential jackpots including Mini, Minor, Major and Grand. This is randomly triggered on any spin and can pay a minimum of $1 million.

Man of Steel free play slot is guaranteed to provide a world of entertainment with exceptional HD quality graphics, realistic sound effects and an arsenal of interesting bonus features that will keep you glued to your screen. If you love superhero themed films, this is certainly a game you will fall in love with. Another fine superhero styles slot is Green Lantern, a recent release by Playtech, it features collapsing wins, wild symbols, and free spins.

Man of Steel slot machine is a featured slot at one of our recommended casinos, 21 Nova Casino, offering a 320% bonus up to $320, it is the ideal fit for Canadian players with a love of gaming. It offers a great range of slot games, video poker, and table game variants, all ready to offer you winning action. Joining that parade you find a great customer support team, multiple promotions, and a VIP club. Register today and reap the rewards!