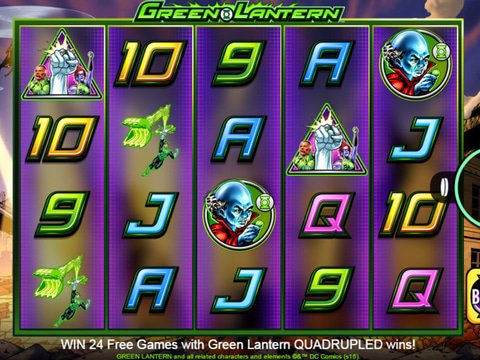 Playtech recognizes the fact that people around the globe appreciate the mythic abilities and qualities of enduring comic book characters, which increased the designing team's passion. Green Lantern slot machine is inspired by the mighty superhero appearing in American comic books and his history originally started thousands of years ago when a green meteor feel north of ancient China.

Green Lantern is a branded video slot created by Playtech casino software in cooperation with brand owner DC Comics as well as Warner Bros. Entertainment Inc. offering online players the opportunity to experience the reel power of the superhero, his power explodes when his ring is inserted into a laser beam, a process that takes place before he heads out to battle evil. Supernatural green light frames the reels and audio include reel humming that is punctuated by vibrant sounds while symbols animation celebrates successful combinations, formed from poker symbols, superhero Green Lantern, evil enemy Sinestro Kilowog, and Tomar-Re, Guardian of Oa. Green Lantern is available on our site as a free play slot and can be enjoyed with no registration and the game requires no download. The demo version offers play identical to the real money version, and both versions are available on mobile and PC. Visually Playtech created a masterpiece that also depicts the box office hit movie and once readers enjoyed the free demo version the lineup of bonus features, progressive jackpot, and the collapsing reels will undoubtedly tempt you into discovering its real cash winning power.

Our review on the Green Lantern video slot showcases the exciting bonus features that not only appeal to Canadian players but also attract the attention from players around the globe. The game offers 243 ways to win across 5 reels and a progressive jackpot, launched simultaneously on all platforms including handheld devices and desktop. Great winning opportunities is offered across the collapsing feature that offers wins from forming a combination, and as these disappear, other symbols take their space, and more winnings can be achieved within the same spin. Consecutive collapsing wins is what fills up the bar blocks, and four in a row randomly triggers one of three missions. The missions charge corresponds to the number of consecutive wins achieved, 4 up to 5 wins awards charge 1 while 6 up to 7 wins gives charge 2, while 8 or more awards charge 3, charges apply to the missions awarded. The missions include the fear fight mission feature, the training center mission as well as the secret sector mission.

The fear fight mission offer staking wilds at the bottom of each of the reels during the mission, and the free spins continue until all reels are covered in stacking wilds, charge one offers 5 wilds, charge 2 gives 6 wilds and for charge 3 you get 8 wilds.

The secret sector mission also awards 10 free spins although these are enhanced by win multipliers, the feature starts with 2x multipliers and 3x multipliers for charge 3 and every consecutive collapse increase the multiplier up to a maximum of 9x.

We recommend playing at one of the finest online casinos powered by the Playtech software, Bet365