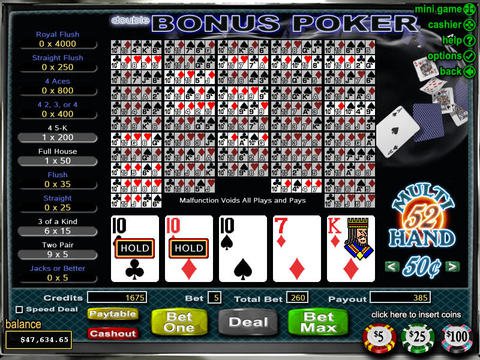 One of the many variants of 5 card Poker that focuses in on a particular number sequence for pay outs is Double Double Bonus Poker. Double Double Bonus Poker could even be one of those games for those players out there that believe that they have a special number. Some people may say that's a crazy notion, none the less a lot of folks believe it. This would then be a video Poker game for those that believe in their lucky number 4, with its lucky 4 combinations!

To get this single hand game underway, there are 5 cards dealt face up. The object is for the player to make a winning hand that's on display on the Pay out table on the screen. From the cards dealt, the player selects what cards to 'Hold' by clicking on each card. The remaining cards are then replaced with fresh cards once the red 'Draw' button is selected.

There are thirteen different ways to win and as mentioned the focus is on the Four combination.

Aside from the Royal Flush, the largest payout for 5 coins is 1750 coins and this is paid for yet another four sequence that of 4 Aces with a 2-4.

With maximum stakes, the Royal flush is the ultimate prize and should this sequence come up, the player earns 4000 coins ($20,000).