Jacks or Better
Enjoyed playing this game?
Rate it → 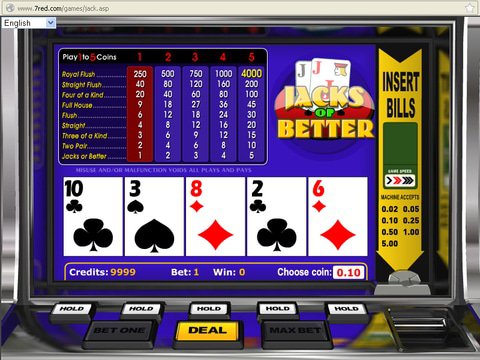 For an online video Poker game that has decent payouts yet can be started out with small stakes a player may care to take a look at Jacks or Better. This game has been a very popular game to play online, and there are many options of the game provided by many software developers.

Betsoft have been established and developing gaming software since 1999 and Jacks or Better was one of the first classic Poker games to take to the market. True they have now advanced with the release of a huge number of variants for the player to experience, but sometimes it's fun to flip back to the early days with this wonderfully retro styled looking game, it really is video Poker at its purest.

Jacks or Better, evolves around the game of 5 card draw. To be a winner, the player needs to build a hand containing a minimum of a pair of Jacks.

With eight other options for winning hands also available, the idea is should there be no winning hand from the original 5 cards dealt, he selects which winning hand to go for from the Payout table above the cards. He holds the cards required for the potential winning hand by clicking on the cards, then clicks the deal button again for the remaining unwanted cards to be replaced with fresh ones.

Other winning hands the player may choose from will always be dependent on the cards he is dealt. Next moving up from Jacks or Bettor is Two Pair, where the payout is double, followed by Three of a Kind, a Straight and a Flush.

After the Flush comes the Full House; now the player who's playing his maximum bets looks to the Heavens as he shoots for Four of a Kind, a Straight Flush or the ultimate Jackpot payer of the Royal Flush, with the option of doubling his bets along the way.

To Play Jacks or Better today for free, come visit at the WinPalace Casino, a fun experience awaits!