Time To Be Whisked Back To Yesteryear With Betsoft's Bonus Poker! 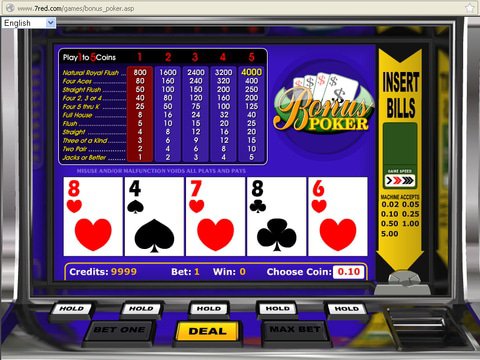 Bonus Poker is one of the many different games of Poker a player can choose from the plethora of online games to choose from. One hardly knows where to turn when looking at all the exciting games available, however this one certainly has a special feel to it as soon will be discovered!

Bonus Poker is a video Poker game that plays directly in the players' browser. The rendering of the graphics is pretty neat as there is something very retro about the way they are delivered. Retro style is pretty much the latest in thing, so players that are familiar with the old style video Poker games from when they were growing up are in for a treat as this most likely will stir up those wonderful nostalgic memories from yesteryear.

Betsoft keep all the traditional rankings the same and as expected the top paying hand for the game is the all-natural Royal Flush. Using a top wager of 5 coins and landing one of these little babies a player can rock his balance with an avalanche of 4000 coins.

Moving down the pecking order the next largest prize is for four Aces. There are other video Poker games that pay out more for this hand, so it's always recommended when evaluating new games to study similar games and compare pay tables, however paying out 400 coins for the top wager of 5 coins, it's still a handsome reward for the effort.

Next in line is Straight Flush, Four 2's, 3's or 4's, and Four 5's through to King. Descending through the rest of the Payout Table next is Full House, Flush, Straight, Three Of A Kind, Two Pairs and finally Jacks or Better where a player collects on a single pair of Jacks, Queens, Kings or Aces.

Play Betsoft's Bonus Poker at the WinPalace Casino. Here the player gets to play this exciting Poker variant for free!