Who Wants To Play Betsoft's All American Video Poker Now Now For Free?

All American
Enjoyed playing this game?
Rate it → 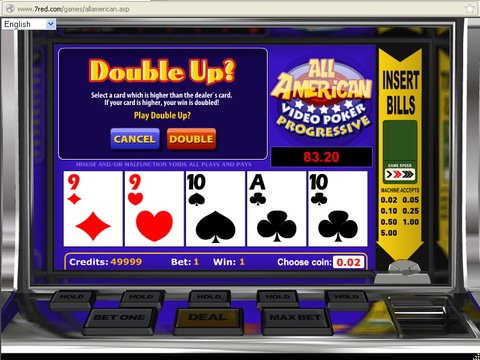 When one thinks about exciting slots to play one straight away thinks about Betsoft and their gaming software. They have video games too as with their All American Video Poker game, an exciting table game alternative for the Poker player enthusiast.

The setting and theme of All American Video Poker differs from the majority of other video poker games, none the less the basic rules remain the same. With one line to the game a player can play a hand for as low as $0.05. The largest coin size a player can use is $5 with a total of 5 coins allowed for each and every spin.

An easily viewable table of payouts situates itself above the five cards and when the player wins, the winning hand lights up on the chart. Before the winnings are added to his balance, he now has a chance to play the Double Up game where beating the dealer will double the size of his win.

As always in the majority of video poker games the top prize is for landing a Royal Flush and when using the maximum amount of coins with American Video Poker, a payoff of $20,000 can be scooped on this 4000:1 winning line.

What separates this game from others are some of its payouts for winning hands. In particular for a straight and straight flush, these are surprisingly high as players who have played video poker before will immediately identify from the Pay Table on the screen.

In most other video poker games a straight pays less than a flush. Not so here, they are both equally matched at 8:1. Also instead of paying out a little more than four of a kind for a straight flush, it pays over five times as much!

Play Betsoft's All American Video Poker game today. At the WinPalace Casino it can be played for free, why wait?