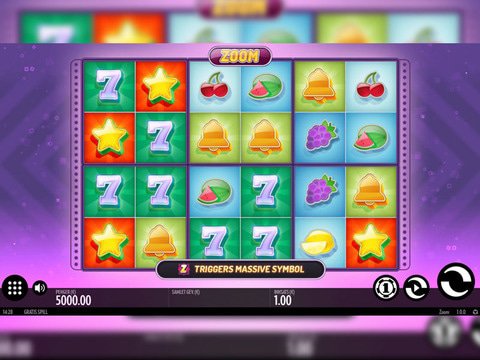 Classic virtual slot games have been gaining its prominence among new - and even regular - players for its simple mechanics and exciting rewards. Some of these classic reel games include conventional fruit themed slot machines with easy gameplay and enticing in-game display. One of the most known classic fruit machine games in the gaming industry is Zoom slot machine developed by Thunderkick software for both its online and mobile gamers. You may now try this free play slot game on this page with no download required.

Zoom has 6 reels, 4 rows, and 64 unique paylines which its players can wager on. Just like any other classic slot machines, it also features a simple game screen yet with a modern and unique touch for its players.

This game highlights the usual fruit reel symbols like cherries, grapes, lemons, and melons. It also includes the game's "Wild" symbol and the "Z" symbol which acts as the scatter. Combinations of these symbols grant different amounts of winnings and special rewards.

You may win at least 15 times of your total wager up to a maximum 1,500 times of winnings. The more active paylines you played the more chances of winning big credits in the slots.

Aside from the Wild symbol which replaces any reel character for you to get a winning combination, Zoom slot machine also offers its players an exciting feature with the help of its scatters.

As mentioned, the Z character acts as the game's scatter symbol. When this character appears on the game screen, it rewards you with one free re-spin and a massive symbol covers the 4x4 space on the grid where it landed. If you get another Z character during this free spin, the coverage of the massive symbol expands and covers another 4x4 space.

If the symbol continuously shows up, it might cover all quadrants for huge amounts of winnings. But in reality, the Z symbol may only appear for at least 2 or 3 times on the game screen.

You may also activate another bonus feature when you chance to have the Z symbols in four adjacent quadrants - forming a square pattern massive symbol on the game screen. This feature grants you a bonus free spin with a guaranteed massive symbol which covers another 4x4 space.

If you get to land the said combination, this special bonus feature also rewards you large amounts of winnings.

If you're fond of the conventional slot machine games in both the online and mobile platforms, you may also want to try 1x2 Gaming's Classic Fruit slot machine. Classic fruit also features the traditional graphics and mechanics of a classic slot game. It only has 3 reels with 5 unique paylines for its players. You may at least win $25 up to $1,000 of total winnings on an active payline.

You may readily play Zoom slot's demo version, with no registration required, in Tropezia Palace Casino. Canadian players are also welcomed on experiencing this game on this site. You are rewarded with free spins and no deposit bonuses when you play with real money.