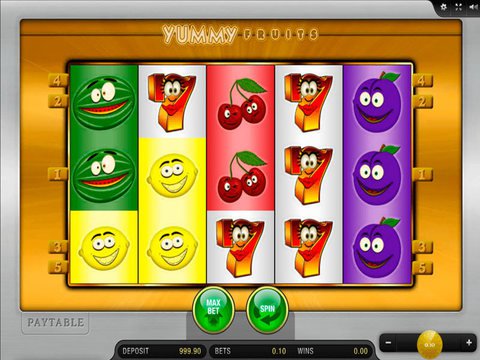 If there are games with themes that are not overly used in the slot industry, there are also games with themes that have already been used in too many games that it's already been a foregone conclusion that they are too hard to count. Fruits belong to the latter category and though it may spell bad things for other genres as it would mean that they are too common, it is different when it comes to fruits as they have already become timeless favorites and classics that would never fail to entertain. Merkur Gaming however, still set it as their mission, to create a more impactful slot game based on fruits and the result? The Yummy Fruits Slot Machine. However, this seemingly ordinarily titled game has a secret in store for players and if you want to find out more, see it for yourself by playing it with the no download Yummy Fruits free play slot demo.

Will you Eat them?

In our current generation, it has become all too obvious that people get more concerned, touched and impacted by characters that are extremely cute. And with this fact becoming more evident nowadays, it has been capitalized by Merkur Gaming and has executed it with the Yummy Fruits Slot Machine, becoming the core of its extraordinary appeal. Will you be able to eat fruits with such cute faces as the ones portrayed in the game? The Yummy Fruits slot machine may have a completely classic look with all the classic fruits but in this game, they are personified to give them diverse expressions that's bound to make you think twice before eating them. The game's background is gold while the reels are as colorful as they can be, giving an eye-popping appeal to the machine. The controls are ever-smooth and intuitive, which is expected from the brand while still having a low-risk betting range of up to 10 coins per spin. You'll see cherries, lemon, orange, grapes, watermelon and lucky seven in this game, which are certainly all too familiar already for those who have played classical games. The Lucky seven, just like any classic, holds the highest payout of the game at about 1600 coins and one more difference between it and other games is its lax mechanics. The mechanics are said to be lax because unlike other slots, the payline doesn't need to be filled up with the winning combination. Even three reels can give you a winning combination and this opens up more winning opportunities for you as a player.

The idea of personifying fruits didn't only strike Merkur Gaming, Playtech also had the same idea with its Funky Fruits Slot but, taking the fruits into a whole new environment which is the beach. The art approach of this 5-reel and 20-payline game is also different from what Yummy Fruits slot machine offers while providing lucrative prizes that will surely reel customers to their side.

Play with the cute Yummy Fruits Slot machine and make sure that you'll spin it with our recommended site, the Lvbet Casino. You'll experience exclusive, lucrative bonuses in this site, along with plenty of common promotions you're surely aware about like free spins bonuses and match-up deposits but, in a higher scale than other web-based waging establishments.