World of Wizard
Enjoyed playing this game?
Rate it → 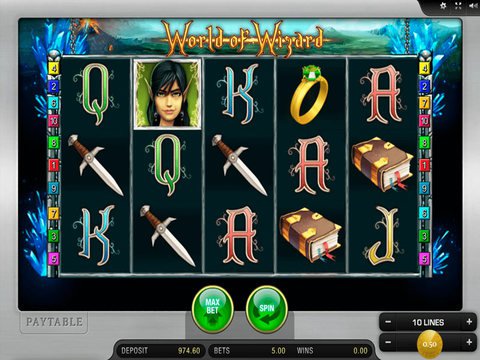 If there's one theme that players would never get tired of then that's definitely fantasy-based games, more particularly those that are centered on magic themes, wizards and other magical creatures you can think of. The exhilarating and unique experience which they bring to the front of the industry are truly like no other and Merkur Gaming, with its World of Wizard Slot Machine, aims to set the bar higher for other magic-themed games. However, would it be able to do so? Canadian Gamblers and others from varieties of countries would have surely heard of the aforementioned brand already but, there's no doubt that you'd agree that this one is a bit more upscale than their classic and traditionally-styled slots. Read on the review to know more about it or take your curiosity further and try it out yourself with the stunning no download demo version of the game - the World of Wizard free play slot.

Adventure Across a World filled with Magic

There are many references that could have been used to create this World of Wizard Slot Machine just like any other magic-themed games however, it would certainly be easy for some to take note that it has elements of the famous 'Lord of the Rings' Trilogy behind its mechanics. The Wizard in the game is a white-bearded one with a long staff, There's a short sword, a ring and a magic book - which are all the hints you need to see that it really does have resemblance to the movie. The elf in the game is the one with the highest payout possible, able to reward up to 2000 coins to lucky players. Although the wizard may not be the highest one with its 1000-coin payout, he is still a powerful master and as such, he plays the role of the scatter, which can grant free spins to players for more lucrative chances of nabbing the top prize of the game. Going back to the basics of the game and looking into its structure more intricately, it comes with a 5-column and 10-payline reel setup which holds a changeable feature unlike the fixed ones from majority of the Merkur Gaming games. This gives you more control to the betting range you'll take or the risk you're willing to take, which can be as high as 20 coins per spin. It may not be risky at all for high rollers but, the game will still provide quite an invigorating experience for anyone with the harmonious elements that comes into play with its reels.

Take a look into a darker side of the Magical Dimension through the Wild Wizards of Saucify, imbued with a 5-reel and 25-payline matrix. It comes with a very different approach in showcasing magic but nevertheless, it's a worthy game to play with as it offers a staggering $10,000 jackpot prize to its players.

In order to delve deeper into the World of Wizard Slot Machine, you'll have to make sure that you're equipped well and playing the game at Lvbet Casino will certainly be your best measure. It offers some of the most lavish and posh bonuses to keep you motivated in spinning the reels more, while guaranteeing safe and secured transactions with its cutting-edge technology backed up by reliable support.