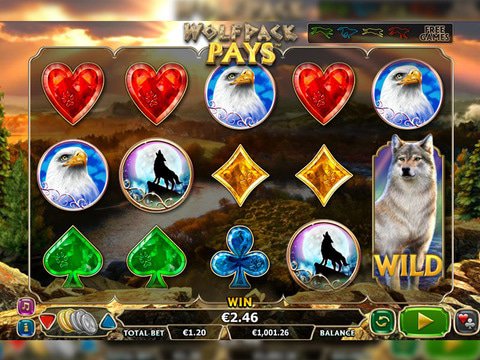 Wolfpack Pays slot machine is one of the many mystical themed games followed by many online and mobile players. This features a mighty lone wolf displaying its natural powers by howling over the mountains and beneath the full moon to control the spinning action of the slot. New players are welcome to experience Wolfpack Pays free play slot game here with no download required.

This 5-reel virtual slot, developed by the NYX Gaming Group has 40 fixed paylines with credit line options ranging from 0.01 to 2.00. It also has exceptional character and symbol graphics to complement its unique theme and gameplay.

These include the main wolf character, the bald eagle, four gem symbols which represent the suits from a deck of playing cards "" heart, diamond, club, and spade. These gem symbols are like precious stones which are also perfect icons for the theme.

Aside from these unique features, Wolfpack Pays boasts to its players the 243 ways for them to win in this game. Yes, there are 243 ways for you to secure your winnings and have a chance to hit the jackpot at stake.

However, it also has the lowest credit multiplier in the online gaming industry. Payline multipliers range from a minimum of 2 times the winnings, up to 800 times of the credits only. Compared with other similar slot games, this paytable is a bit below the average multiplier conversion.

One thing that sets this slot apart from other similar games is its On a Roll special bonus feature. This feature rewards you with free re-spins which can be accumulated if you consecutively win in the reels. The more consecutive wins you get the more re-spins you collect. This increases your chances on getting another win and hit the jackpot without waging more credits.

After your fourth consecutive win, the Wolfpack in-game feature is triggered. This bonus feature activates the Free Games feature of Wolfpack Pays. This rewards you with 5 extra wolf wilds on the grid which will increase your chances on winning big on the slots.

This special feature will be played with unlimited tries, and will only end after three non-winning spins.

If you succeed on this bonus feature, you may be rewarded with high multipliers ranging from 20 times to 100 times of your total winnings.

Other Games With 243 Ways To Win

Aside from Electric Sam, you may also consider Reel Gems and Burning Desire slot machines for the same number of paylines.

Players may practice and enjoy Wolfpack Pays demo version at Slots Million Casino with no registration required. Canadian players are also allowed to participate with no deposit bonus and free spins.