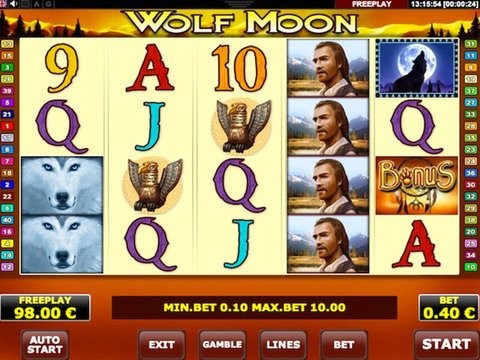 Scouring the deep ends of the jungle while the sun is still up, seeing the work of divinity through countless creatures and bathing on the pristine atmosphere of the outdoors on day time could equate to a great day for some. However, there are simply those thrill-seekers that would want something more, like meeting with vicious animals in the middle of the night and searching for treasures then on. This setup is spot-on to what Amatic Industries serve through their Wolf Moon Slot Machine and there's no way you wouldn't get hooked to its unique and mesmerizing environment. Canadian gamblers loved the fact that this game goes beyond the Wolf and Moon concept and introduces a unique combination that's bound to amaze anyone. Try out the game and see for yourself what it offers through the no download Wolf Moon free play slot demo. This way, you have nothing to risk with a no registration and no real-money experience.

Contrary to what could be expected from the game's name and its peers, the Wolf Moon Slot Machine strays from the conventional by providing simplicity while setting the environment of the game on a sunset rather than a deep night. The silhouette of the forest and mountains, illuminated by the setting sun, amplifies the beauty of the game by leaps and though this doesn't make the game the most breathtaking, it's still enough to bring satisfactory joy to one's experience. Aside from the elements that could be derived from the title itself such as the wolf, the howling wolf with the moon, and the hunter symbols, there are also other significant symbols you have to watch out for. This game's focus may be the wolf, but it could also reward players with great prizes through the artifacts infested on the reels. There's also the Dreamcatcher bonus symbol, providing payment anywhere on the reels while also giving the opportunity to grant you free spins and amplify your winning chances. Aside from also being the highest-paying symbol, the howling wolf and the moon also plays the role of the Wild, which means that it's helpful in completing winning combinations with its substituting prowess. If you're already impressed, then you're bound to be more amazed as the game even has a jackpot of over 100,000 coins, enough to give anyone a life-changing experience.

Rewards on catching wolf on the Wolf Moon Slot Machine is unquestionably astronomical. Another game that puts emphasis and importance on the Wolf as its principal character is the Wolf Run Slot from IGT. It has the same matrix as Wolf Moon with its 5-reel and 40-payline structure. Though its jackpot comes at only $5000, its graphics and features more than makes up for it to provide players with an experience that's worth the time and money.

Scouring the jungle as the sun is setting while hunting wolf and artifacts is a hundred percent dangerous and in such luck-finding activity, you could definitely use the help of a great site like Mars Casino. It will prepare you by welcoming you with 50 free spins bonus, 100% match-up to double up to $400 of your first deposit, reload bonuses and more. You'll also be guarded by superior security and backed up by stellar customer service for peerless convenience.