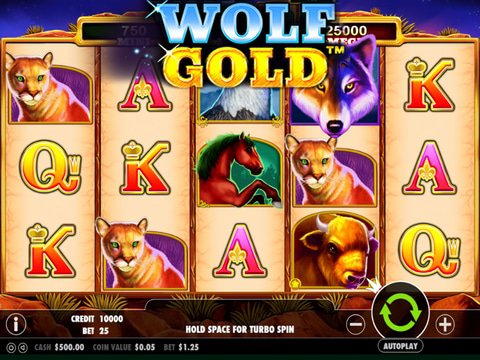 Travel back in the era of American Indians and learn of their culture in this new slot game installment from Pragmatic Play software. In Wolf Gold slot machine, you barely depend on pure luck as you also seek guidance from the ancient wolf spirit to win you big on the reels. Watch out for special bonuses this ethereal character brings which can rack up your total winnings. Get rewarded also with the physical presence of other animals along the way. Start planning your adventure now as you try this free play slot here with no download required.

This North American inspired five reel slot has 25 fixed paylines for its online and mobile players. You can place stakes for as low as 1 coin up to 10 credits with coin sizes of 0.01 and .0.5 respectively. This allows you to play with the maximum wager of 125 credits per spin.

Since we're dealing with animals from ancient America, you'll see different land and air creatures as you spin the reels. These include a puma which rewards you up to 200 credits. A stallion also shows up on the screen which pays you 300 coins at most; whilst an eagle grants you as much as 400 credits. The highest paying symbol belongs to a bison which rewards you a whopping 500 credit payout.

The wolf character represents the wild symbol of Wolf Gold slot machine. Just like any other wilds, it substitutes to any character on the screen - except for the scatter and bonus money symbols - to complete a winning line. It also pays you instantly with as much as 500 credits when you a complete a line of wolves.

You should also watch out for the scatters, represented by an image of a towering stones, which only appear on the first, third, and fifth reels. Land three or more of this symbol on these reels and get rewarded with five bonus spins. During these free games, reels 2, 3, and 4 are covered with a giant wolf symbol for more chances on winning.

Unleash the real powers of wolves in Wolf Gold's demo version at Slots Million Casino with no registration requirement. Canadian players are also welcomed to play with real money wagers to get no deposit and free spin bonuses.