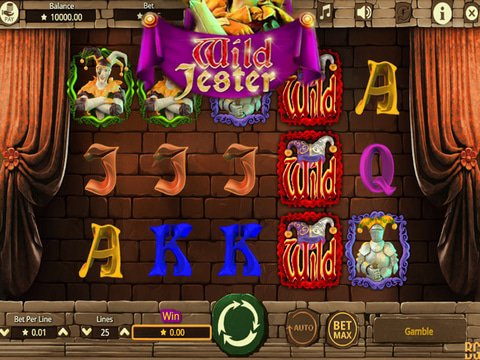 The Joker has been the subject for many games found on the betting world and this includes even the ever-flourishing dimension of slots. Despite being used more than it should be just like other themes of the same popularity, its fame never ceases to exist and in fact, it is even continuing to grow. Booming Games Software knows rather well just how true it is, making it no mystery how and why they have added the Wild Jester Slot machine to their games portfolio. Since the medieval ages, the jesters have become synonymous to jokers and that isn't in terms of appearance alone. If you want to get a little more time with this game and find out what really makes it the joker game to play, have a look at it with no registration and no download required with the Wild Jester free play slot demo in this page.

Back to Medieval with the Jester

The trumpets and the organ harmoniously playing at the back of a crisp and solid graphics would surely give you a great start as you enter the world of the Wild Jester Slot Machine. You'll surely feel the glorious yet very leisure life of a Jester in the past through the audio alone while the game features a simple brick wall with curtains at the side as its backdrop. The game runs in an exceedingly straightforward 5-reel and 25-payline gameplay that's most commonly used today. The controls of the game are also intuitive and resembles the most commonly used controls format of the brand. It is easy to change bets, spin the reels or even engage on a double-or-nothing feature of the game. When you click and go to the left of the game screen, you'll conveniently see the few symbols that makes the game work. There's only the card symbols and the three jester symbols which includes the jester hat, the jester himself and a knight with a jester hat. Each of them have special capabilities with the hat playing the popular role of the wild, The knight with the jester hat as the scatter that can graciously provide lucrative free spins, and the jester himself which acts as the most special symbol that can trigger a superb 2-way Payment. To make the game even more lucrative than it already is, it also utilizes a wild-reel, almost giving you a handicap in every reel as will always be a wild symbol except for a single icon of scatter. With this kind of setup, what more do you need to win and enjoy?

NYX Software also has its fair share of jester game that you would surely love to try out - the Joker Jester Slot. It comes with only 20 paylines to play with and a max betting range of $40 per spin. Compared to the Wild Jester Slot Machine, the game also comes with a simpler, and more cartoonish art which makes it look a bit flimsier than the latter.

If you're intrigued to find out what the jesters of the Wild jester Slot Machine can bring to your gambling life, push forth and enjoy it at our suggested site, the Tropezia Palace Casino. It is famous for its high-quality overall operations, support, banking options and plethora of bonuses that will make your gaming experience more worthwhile.