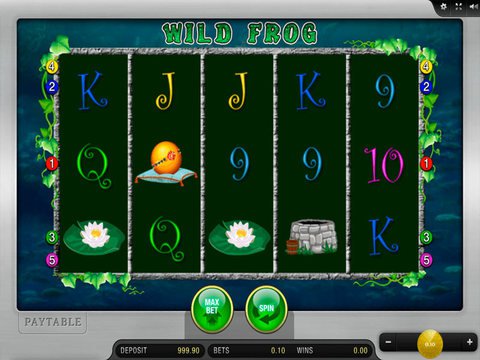 More often than not, jungle-themed games will bring you setups and environments surrounding some of the most majestic and powerful creatures of the ocean with many of the smaller creatures ignored and neglected. Merkur Gaming has seen this as an opportunity to create a unique game and theme based on one of the lowest creature in the food chain which is the wild frog. The Wild Frog Slot Machine will take you to a whole new dimension of gaming with the Wilds, a whole new environment and a whole new setup that you won't commonly see in other brands. However, does this little creature have the power to go head-to-head with bigger competition? Get to know more about the game with no download and no registration required, through the Wild Frog Free play slot demo version of the game placed in this very page.

The Nature Surrounding the Amphibian

Despite being small, Wild Frogs belong to Amphibians and is perhaps part of the most known amphibian today. With the capability of being able to go underwater and comfortably walk or jump in land, there's little to no doubt that it has the ability to boast to other animals in the jungle. Just as you would expect upon your entry to the game, you'll be welcomed in the natural habitat of frogs which is a pond. The pond in the game is a bit cloudy, which is the perfect waters for Wild frogs to live in. At the center lies a leafy-designed reel which is a perfect complement for the waters. The reels itself boasts a simple 5-reel and 5-payline structure, with fixed pay lines and betting range that can only go as far as 10 coins per spin. The conditions definitely aren't appealing enough to reel in high rollers but, it has decent amount of payout with its enjoyable experience which is more than enough to get other types of rollers into the fray. There are card icons in the game, leaf floating on the pond, a well, a golden pearl, a golden crown and of course the wild frog. With the golden crown, you may even associate the frog in fairy tales but unfortunately, the game doesn't swing to that side of things. The Frog is a staggering symbol however, which holds both the highest payout of the game and the most interesting and helpful feature, which is the wild capability along with the key to the jumping frog feature of the game that may just be what you need to get more winning prizes.

With frogs being one of the lowest in the food chain, it is subjected to varieties of danger in its environment. The Frog Hunt Slot will give you an aesthetically-appealing view of what I'm talking about, powered by Betssoft with a 5-reel and 5-payline structure. The game pays two ways from left to right and vice versa which means more prizes to enjoy.

Reassure yourself that you'll be able to play the Wild Frog Slot Machine under the best and most optimum conditions, through the aid of Lvbet Casino along with its supreme number of bonuses, top security and cutting edge platform. It also features an exclusive Wheel Bonus Feature, tiered into different levels with big surprises the higher you get.