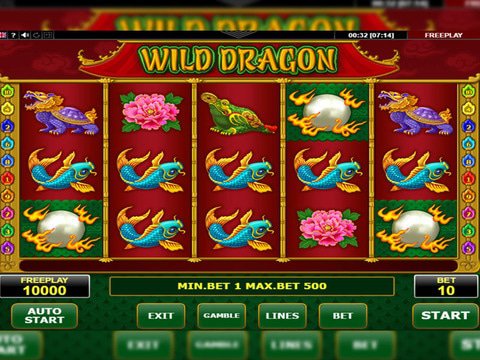 As you gaze upon the magnificent and lofty abode in the form of a Palace, there's simply no shred of doubt that you'll know there's immense amount of treasures behind the towering and majestic columns and walls in the Wild Dragon Slot Machine game from Amatic Industries. The Mythical beast in the title already serves as the clue of what the game is about and if that's enough, you'll surely be able to find out right away the moment you step in the eye-catching and breathtaking Chinese environment served by the game. Orient games are something that Canadian gamblers all know too well already, but the developers of this game still did not fail to present the seemingly cliché title in a rather interesting and curious approach. The no download Wild Dragon free play slot demo in this page will serve as your testing ground and no registration and money is needed for you to proceed.

A Mythical and Oriental Journey towards the East

With an elegant and dazzling deep red background embellished on this game's environment topped with a palace design that houses the majestic reels of the game, you'll certainly feel the prestige emanated by this stellar creation. The royal roof is created with attention-to-detail while the walls are imbued with golden column and materials that are carved to look like bamboo, infusing a more oriental feeling to the game. A neatly packed control system graces the bottom of the game allowing players to humbly control the bets made in this 5-reel and 10-payline gameplay. Like in many Amatic Industries game, the betting range here comes up to 500 coins per spin while the gamble and auto-play feature are also available for daring and laid-back gamblers, respectively. The most impressive thing however, about this game are its peerless and unbridled symbols that are created with intricacy deserving of mythical beasts and creatures. There's a beautiful lotus flower, a koi carp, a purple turtle, a jade frog holding a coin in its mouth, a majestic Vermillion Bird and a ferocious and divine Dragon that can be found in this game. The Dragon proves itself to reign supreme with its Stacked Wild feature with multiplying effects on top of its substituting capability. There's also the scatter that could pay anywhere while other symbols hold various equivalent prizes for you to indulge on.

The dragon is a very dominating beast that has soared through Ancient Myths all over the world and its fame can also be seen on how many games about it that you'll encounter. There's also the 50 Dragons Slot from Aristocrat and much like the Wild Dragon Slot Machine, it also takes the path of the Orient and Myth. It has a 5-reel and 50-payline matrix and its jackpot hits up to $2000. There are multipliers, free spins symbols and wild symbols in the game, which could help you aim at its most precious jackpot prize.

The prestige and eternal glory of Dragon in the Wild Dragon Slot Machine can only be fully maximized in the right place and we recommend the Mars Casino. Not only is it oozing with promotions from match-up, free spins bonus and more, but its superior availability, security and customer service are all keys to gain immeasurable advantage in spinning the reels.