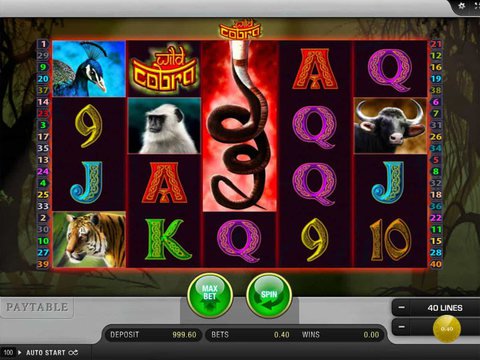 If there's one thing you may have learned from Adventure movies and action-packed movies, it's definitely that behind dangerous and worst encounters come some of the most fortuitous encounters of your life. What better way to represent that kind of mentality in the slot industry other than a trip to the jungle filled with beasts and creatures that's just lurking between the trees, bushes and ground. Merkur Gaming has the perfect setup for you ruled by one of the most deadliest, creepy-crawly alive - the Wild Cobra Slot Machine. The King cobra has an indisputable reputation throughout the globe for being the deadliest and humans aren't the only ones who know that as animals seem to be wary of them as well. In this game, discover the action-packed adventure with no download needed, in the Wild Cobra Free play slot demo to give you a heads-up about what to expect from this jungle game.

Meeting up with the Deadliest

Taking you to a murky forest, there's little to no doubt that there are plenty of surprises waiting for you in the Wild Cobra Slot machine. Only silhouettes of trees can be found on the background with its murky color and at the center lies a gigantic 5-reel machine with a massive 40-payline matrix. The game's reel is made in a way that it accentuates and makes the symbols more noticeable to the players, which makes a huge difference in whether the game will prove to be satisfying for the customers or not. Also, it is important to note that the Cobra itself isn't the only dangerous creature within this jungle. There are also other noteworthy ones such as the Tiger, Buffalo and Elephant, along with other animals like monkeys and a majestic peacock. There are card icons in the game as well with winning combinations that can also give satisfactory wins that may help you breakeven with your bets. The powerful and lethal King Cobra of the game comes with 1250 coins as jackpot and if you think that it's not good enough, you'll surely change otherwise when you know that it's a stacked wild that can take up a whole reel if it lands correctly. There's also the game's Symbol and this is the game-changing scatter symbol of the game because it will allow you to utilize 12 more chances of getting a high payout without even damaging your bankroll.

See the other lethal side of the jungle that will introduce you to bears, crocodiles and more, with the Jungle Spirit: Call of the Wild Slot from Net Entertainment. It comes with only 5 reels but with a powerful 1024 ways to win. It is obviously a game with low variance, welcoming frequent wins for your pocket that may even hit up to 1825 to7500 coins.

Discover the hidden dangers of the Wild Cobra Slot Machine fully-prepared with a robust bankroll, through the help of Lvbet Casino and its wide array of bonuses. Get to enjoy more spins for free with the free spins bonus of the site, match-up deposits bonuses and delve deeper into the site's exquisite LV Wheel setup that may just give you whopping rewards at the end of your gameplay.