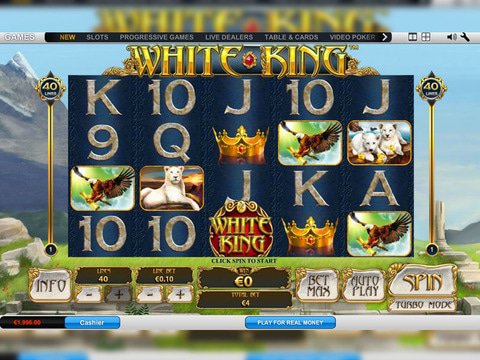 Honored as the King of the Jungle and animals, the majestic lion has always been on a high pedestal whether it be on the food chain or even as a leader seen by other species. The only being that's capable of throwing off the lion from its throne is yet another Lion, but in a graceful and divine White color that allows it to emanate an even more imposing, grandiose and glorious stand. The White King Slot Machine from Playtech, aims to feature this White Lion as its heart, which is even beloved by some as the possible leader of the human race itself. Though it seems somewhat unbelievable, there are truly those that feels its importance on a spiritual level, making them incredibly popular and renowned due to their significance and indisputable beauty. Review the game and accustom yourself to the game's elements through the White King free play slot demo in a no download and no registration version that you're bound to love.

The Prideful and Majestic King of the Kingdom

Set on top of a mountain cliff that's brimming with life as grass covers the land to the point where it looks like pasture - the environment of the White King Slot Machine is truly befitting to be the place for the majestic White Lion. Nestled at the center of the game is the reels with a royal blue background that further implies the nobility of the white lion. The controls are pretty elegant as well, and are placed neatly and in an organized manner. With the highly-intuitive controls of the game, you could also easily manipulate the 5-reel and 40-payline structure of the game and bet anywhere across its betting range of €0.01 to €50 per line bet. In total, bets here could lead up to €2000 per spin, which is certainly a wage that could be taken even by the highest rollers. Symbols on the game aside from the common cards include a crown for the king himself, her white lion queen, white cubs, and an eagle that could even be their royal messenger for all we know. There's also the majestic logo scatter of the game which is also the key to the bonus free games of the slot. The White king himself is the wilds of the game, coming in a stacked form for a more awe-inspiring capability.

Finding white lion themed games could be pretty hard, making the White King Slot Machine to be quite a unique game. Other lion games you will love to try out is the Lion's Roar by Rival Software which is a 5-reel and 50-payline game that stays true to its name and provides a significant rendition of the imposing king of the jungle. The game has a pretty high payout rate while it also makes use of multipliers, free spins and more beneficial features for players.

To make sure that you'll do justice in playing the White King Slot Machine, play it at Slots Heaven Casino. With its massive 100% Match-up initial deposit bonus, topped with over 100 free spins divided into 5 days, you'll surely find it sooner or later, that you're winning lumps of money from this site as you're maximizing your winning opportunities with the site's offers and features.