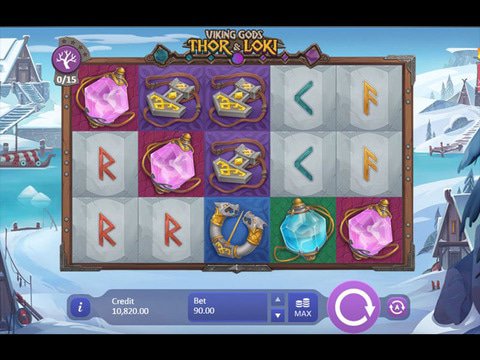 When Fantasy, Mythology and Gods are the center of the topic, there would always be some out there who would prefer looking into the direction of the Norse Gods, also known as the Viking Gods. The most imminent of them all are Thor the God of Thunder and Loki, a powerful trickster God. The concept has been adapted to countless writings, movies and more, along with some gambling games even portraying it as the theme as well just like the Viking Gods: Thor & Loki Slot Machine developed by Playson Software. The theme of the game is made apparent just through its name alone and if you fancy the Norse Gods concept, then you'll surely be in a ride of excitement as you spin the reels of this game. Canadian and wagers from all across the globe will surely find this appealing and you can even try it out in this page with the no registration and no download Viking Gods: Thor & Loki free play slot demo.

If you've ever wondered how the place of the Viking Gods look like, then you'll surely be in for some sweet experience as you enter a more realistic approach to a Viking Village that's obviously in the Colder parts of the world, as portrayed in the Viking Gods: Thor & Loki Slot machine. There's no kingdom and no overly-sized palace in this game but, you'll surely feel the Wildness of the Vikings as you see the Viking boats, houses and other establishments in this game that are filled with the brilliance of snow. At the center of the game is the robust 5-reel and 15-payline structure of the game, showcasing the sleek and outstanding symbols of the game that will make you see the glimpse of the Norse beauty. There are varieties of Norse symbols, some Viking equipment, pink and blue crystals, a set of wild symbols, Thor and Loki. These symbols even play impressive features to the game, which makes it an even more rewarding slot machine. Thor and Loki are both stacked bonus symbols that can cover up to 3 rows and both of them has special ways to trigger the Wilds of the game. If they only cover a single slot, you'll get 2 wilds and if they cover 2 slots, they'll uncover 4 wilds on the reels. If they cover the entire reel, you'll be in for an outstanding free spin bonus game. Each of their bonus game provides different set of conditions for you to play with, which gives you more to look forward to in this game.

You can also play the Vikings treasure slot from Net Entertainment with a 5-reel and 15-payline matrix. It brings a simpler aesthetic display on the screen but you surely would not underestimate it because aside from utilizing impressive features as well, it even packs up to 50,000 coins as its jackpot prize.

We recommend you to give this superb game a spin, through the Slots Million Casino. It has a long string of bonuses for you to enjoy, from no deposit bonuses, free spins bonuses and even reload bonuses. It even has a stunning VIP and Loyalty program for you to join, while allowing you to play it instantly with its flash-play version.