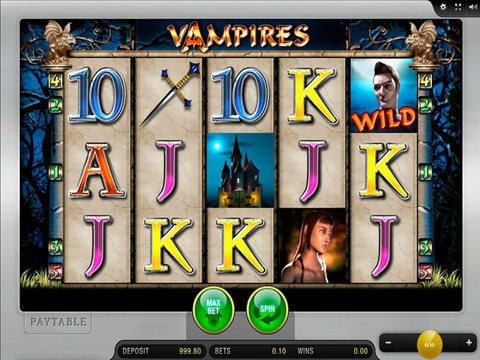 From out of the blue, or more appropriately, from dark - Vampires have become iconic characters and creatures in Horror Films and even Romantic films, truly giving them the spotlight in various forms of media, literature and more. Now, their shifting gears to expand towards more outlet for fame as they enter the Slot industry for some ludicrous, invigorating, action-packed spins. Merkur Gaming has taken it up for themselves to challenge this heavyweight of a theme and the result is the Vampires Slot machine. True, the title seems to be overly simple but, there's no doubt that it has more than what meets the eye. Delve towards the darker ends of this game and see if it really has what it takes to ace the vampire category, through the Vampires free play slot version. The demo is also created with no download and no registration needed, allowing you to enjoy the action right as the game loads.

Creatures of the Night

Among creatures that crawls from their hidden abodes at night, Vampires are without a doubt, one of the most famous of them all and in the Vampires Slot Machine, you'll get to meet them in a land filled with death with tall trees' silhouettes are even apparently devoid of life. The dark sky at the background with the life-devoid trees create the perfect ominous atmosphere that will tell one that the creatures are there. The reels at the center are made of stone and with its 5-column and 5-payline reels, it aims to give you the opportunity to turn this scary moment into something fortuitous. The pay lines in the game are unfortunately fixed, giving people less control except from changing betting rage. However, this also makes the game more intuitive and easy to play with as you only need to choose the betting amount and let the reels spin and rip. There are card icons in the game as well but, what you should focus your attention to are the things that will surely creep you out. There's a dark mansion up ahead, a silver stake sword and a silver goblet, the vampire and of course, the unaware girl who's apparently going to be the next meal of the dreaded creature. The Girl holds the highest payout of the game which is at an amazing 10,000 coins. The vampire on the other end of the spectrum, plays the role of both wild and scatter, giving him the power to complete winning combinations with his substituting capabilities while also being capable of awarding free spins which, will turn other symbols into wilds as well.

SkillonNet has also outdone itself with its 3D and realistic approach of a Vampire-themed game, which comes in the form of the Vampire Feast Slot machine. It comes with a 5-reel and 20-payline gameplay, which as mentioned, comes in creepy, realistic graphics that's bound to give you goosebumps while also utilizing special symbols to aid you in winning big.

We recommend dedicated gamblers and players to take the Vampires Slot Machine for a spin through Lvbet Casino to make sure you're getting the best deal. The site offers some of the most lucrative bonuses out there with their exclusive LV wheel, no deposit bonuses, free spins bonuses, match-up deposits and regularly updated promotions.