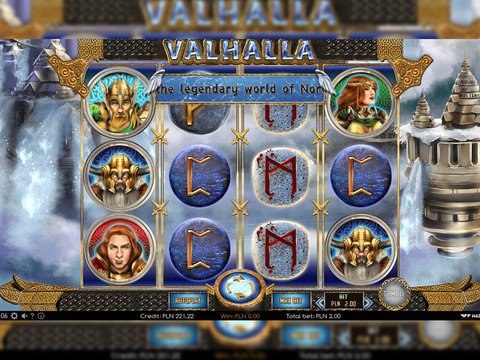 Joining Gods, especially Norse Gods who are known for their glory, valor and exceptional cunningness, is never really about pure strength alone but instead, it's a matter of how worthy you really are. Just like in movies like Thor, it can be seen just how worthiness differ from Strength alone and with the interesting setup of this old fossils and their God Mythology, there's really no other Myths worthier to be integrated on the reels. Valhalla Slot Machine developed by Wazdan Software, truly exhibits the potential of the software and the fact that it's starting to make a name for itself. Although it's far from reaching the heights of the giants of the software development industry for gambling, there's no doubt that it can be the future of the industry. If you are intrigued if this game really has what it takes to spend your pennies, play it with the no registration and no download Valhalla Free play slot demo.

The Glory of Asgard

Asgard is only one of the most mythical names which resounded throughout the Globe. Valhalla is actually an establishment in the grand Asgard Empire and being a place for Gods, there's no doubt that it's nothing short of what you'd expect from its otherworldly origin. The game will surely impress you even at first sight and you may even have hints of admiration when you realize that Wazdan Software really outdid themselves with this one. The game's software is incredibly intuitive and unique to other software. The pay table can be slid downwards while at another panel lies the 4-reel and 54 pay lines of the game. At the scene of the pay table, you'll see the glorious Asgard Empire in all its glory as a Holy Light seems to bathe it with reverence. Proceeding downward continues the picturesque scene of the Asgard, showcasing its lower portions wherein you'll see different structures with animated flowing water which evidently makes the game come to life. The game also comes with a subtle audio that makes the game whole and coherent while a relatively comprehensive control system is located neatly below. In the game, you'll see various characters of the Vikings along with grand personage of their Godly world. The game comes with highly rewarding symbols that's bound to make you more motivated to play more but the setback lies in the fact that it only comes with a Wild symbol as its unique feature. Still, if you are all on it for the experience and high rewards with little attention to extra features, the game is truly the one for you.

Although the graphics of the game Vikings Plunder Slot Machine may seem a bit Elementary, it is still another game that's stems from the Vikings theme like Valhalla Slot Machine. It is equipped with a 5-reel and 25-payline and borne from Habanero, which also brings forth its superior 10,000-coin jackpot paired up with countless extra features that'll help you gain the upper hand in the game and get frequent wins.

Explore Asgard at its finest in the Valhalla Slot Machine, by spinning its reels with Magical Spins Casino. This site truly lives up to its name as it provides you plenty of bonuses from a 100% match-up to $200, regular bonuses and more.