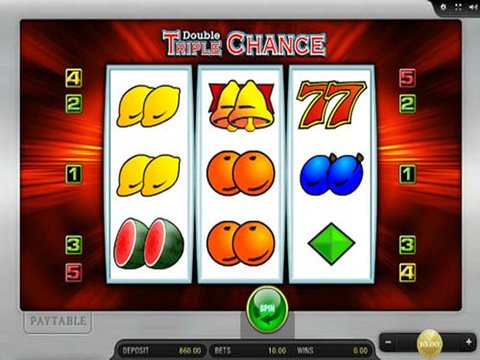 Classics, although termed as outdated, are more seen by many as timeless masterpieces. Though they aren't the most cutting edge, they hold the beauty that has set everything into motion and into what things are today. This is the exact scenario even in the slot industry which is why even Merkur Gaming has their fair share of classic games. Their Triple chance which was supposed to be their own take on a stunning retro classic has become so famous that users craved for more of it. It passed the Double Triple Chance stage and now, there's a new installment in town which is the Triple Triple Chance Slot Machine. With this third sequel to a divine classic, many would surely be hesitant if it could still live up to the success of the other two. The best way to answer that is to get down to action yourself with the no download Triple Triple Chance free play slot demo.

With the Triple Chance known for its retro and nostalgic appeal, it comes with no surprise that it retains such setup even on its third sequel. It's all the same setup as the first game - introducing you to the Triple Triple Chance Slot Machine with a 3-reel and 5-payline structure. The background however, turned to blue, exploding a refreshing feeling to the screen of users and a breath of fresh air from its predecessors' red-based background. The bets in the game have also improved because now, you can bet up to 20 coins per spin, which will surely open up new winning opportunities for you to grasp. The game is still fixed which means that it is as straightforward and low-variant as it was in the past. Symbols may have different payouts but, they are also the same with slight differences in art: lemon, cherries, oranges, blueberries, bell, watermelon and the sevens. The sevens also has a staggering 3000-coin jackpot which is surely enough to keep anyone excited to play more of the game. Just like in any other triple Chance game, this game prides on its Triple Chance feature and since this is the Third Installment, there's a bigger rewin-feature here. When you feel the three reels with the same symbol, you'll trigger the wheels of the game and this wheels come with 9 features to help you win continuously and just a single one to stop the amassing of wealth. With this kind of payout with endless possibility, you'll surely be more than happy to place your real cold hard cash to the front plate immediately.

If gaining a huge sum of money in a classical game is something you're really into, then Triple Profits from Playtech will surely be able to quench your needs with its 9-reel and 3-payline structure. Everything in the game is about cash and if you miraculously win, you'll get a staggering $25000 jackpot.

The more you play the Triple Triple Chance Slot Machine, the better your chances of winning it big and we recommend you to do so with the Lvbet Casino so you can also take advantage of their numerous promotions from welcoming packages with hundreds of free spins bonus and more, up to diverse and exquisite bonuses on their shelves.